“My filmmaking really began with technology. It began through technology, not through telling stories, because my 8mm movie camera was the way into whatever I decided to do.” – Steven Spielberg

Starting with a quote by Steven Spielberg may seem like a lofty way to begin a post about video making by upper elementary students. To clear that potential misconception, know that this post is about the exploration of video making tools – stop motion and green screen – by novice filmmakers. More than that, it is about the joyful, creative, and willing spirit with which my fifth and sixth grade art students embraced and approached the idea of using their hand-crafted Cardboard Creatures as the stars of short films. Back to Spielberg though, this post is also about using technology. Teaching in a 1:1 device school, where every student has access to an iPad all the time, both at school and at home, compels me to help them understand how to use the technology as yet another vehicle for self expression.

There are many ways art students can create animated videos with iPads. We have been using Stop Motion Studio for years, and although not super fancy, it is intuitive for my students and is also free. The Cardboard Creatures were designed to have mobility as one of the Creative Constraints  – precisely because of the animation process. Stop motion animation requires several continuous frames with the subject in a slightly different position for each frame. As an example for the students, I used a wooden artist’s mannequin and posed it in various positions in front of a green screen. I then dropped it into iMovie In green screen mode (a new option in a recent update of iMovie*) and also added audio.

*iMovie added the option for green screen/blue screen in June this year. Many of my students have access through school to DoInk Green Screen app and used that for their videos, as was my original plan. If not, they used iMovie. Going forward, I would just use iMovie. They will be compelled to add audio with iMovie, too, because it is so easy (and fun).

My example video was certainly enough to get the wheels turning for my fifth and sixth grade art students! In many of my classes I have 25-30 students for which I knew the three green screen painted walls we have at the end of our hallway would not be enough. I also wanted to keep the majority of my students in the classroom so I would be available to help them. With this in mind, I took six large empty boxes from a recent cafeteria delivery and cut off the flaps and ends to make filming booths. I picked up a gallon of Behr #1753 Sparkling Apple latex wall paint ($34 at Home Depot – traditional green screen paint on Amazon was $90): 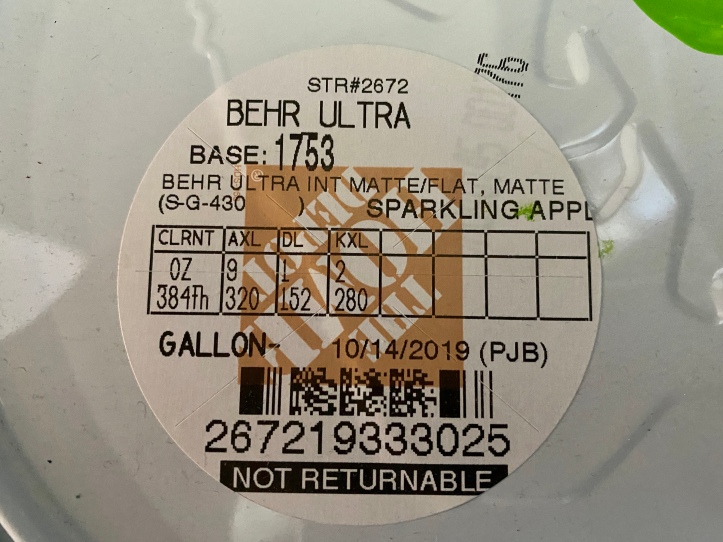 I did buy some green screen gaffer’s tape from Amazon to use to tape up the seams of the box. I made six of these filming booths. 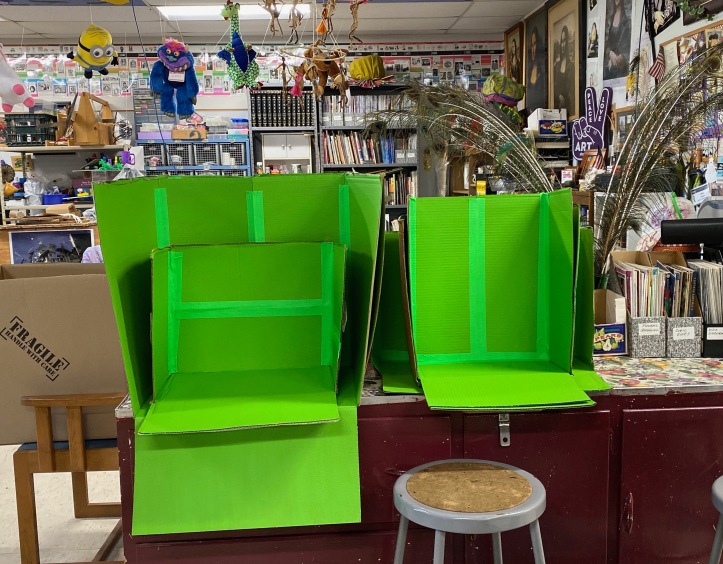 One day as I glanced over at them just sitting there, it occurred to me I could use the filming booths to alter the reality of the classroom space. Dream imagery came to mind. Indulge me, please…: 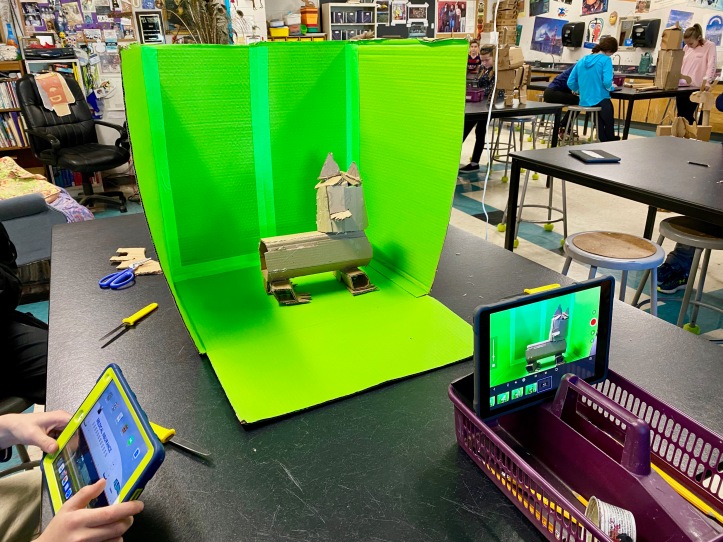 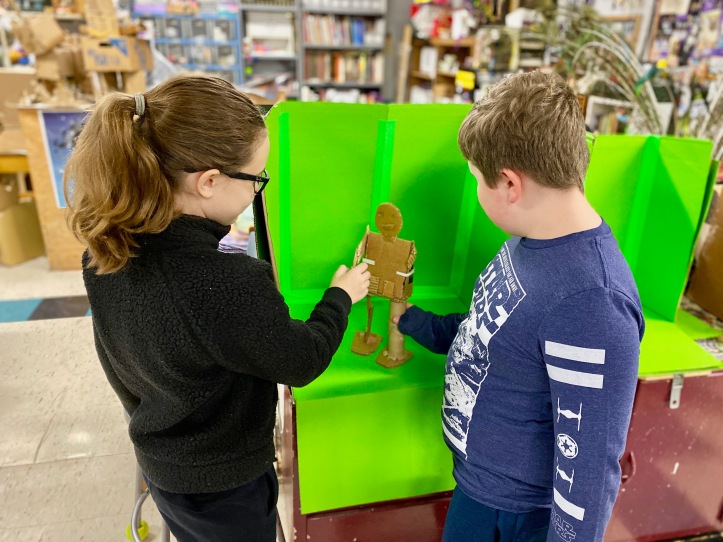 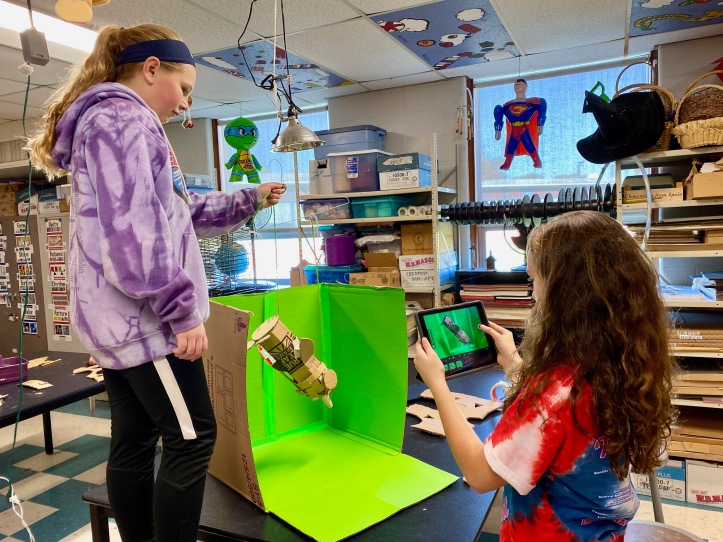 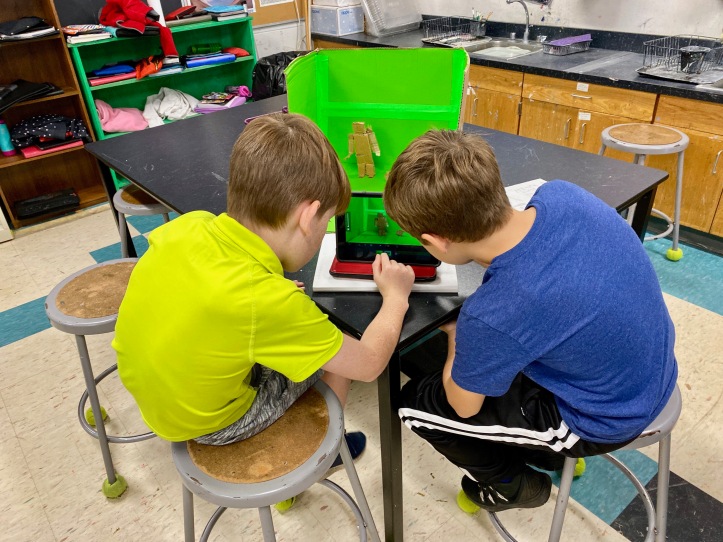 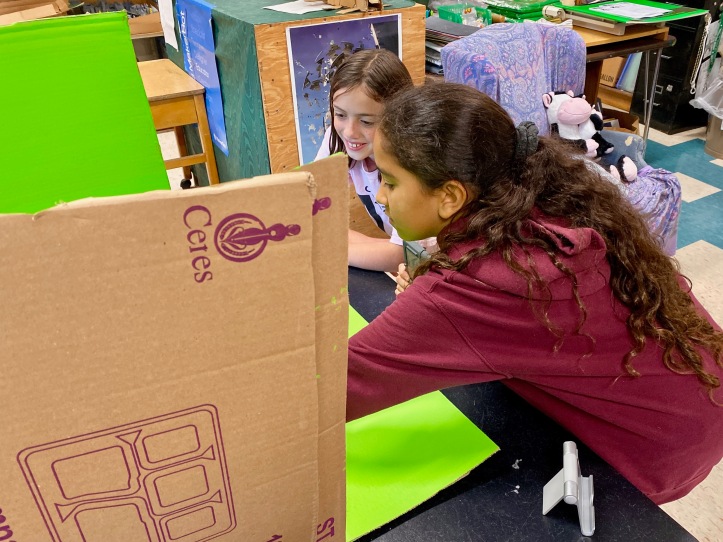 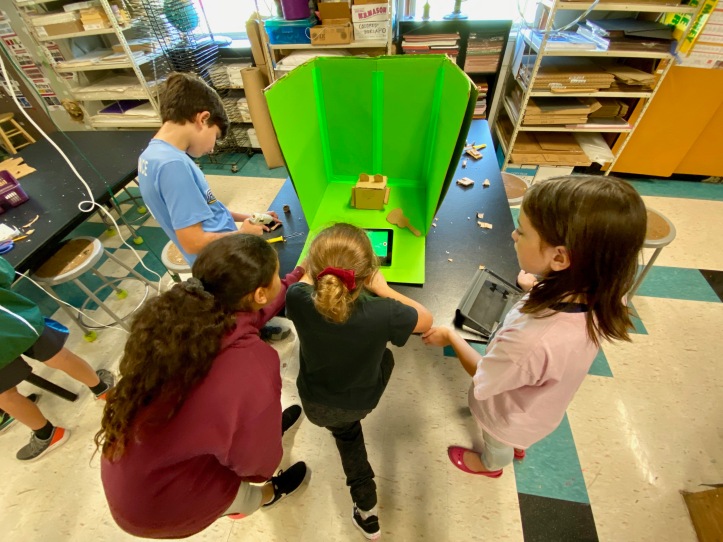 Because so many groups used the filming booths, just a few groups with larger Cardboard Creatures used the green screen walls in the hallway. I also ordered green screen cloth to drape over large boxes to use as stages for the stop motion work so you wouldn’t see the floor. 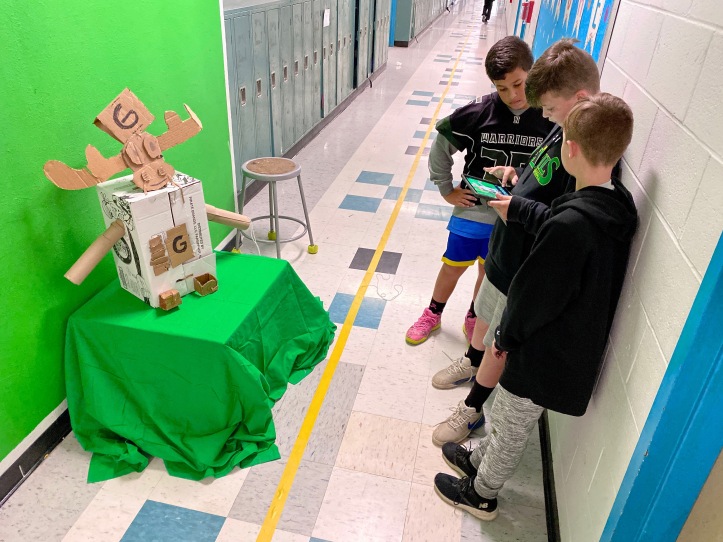 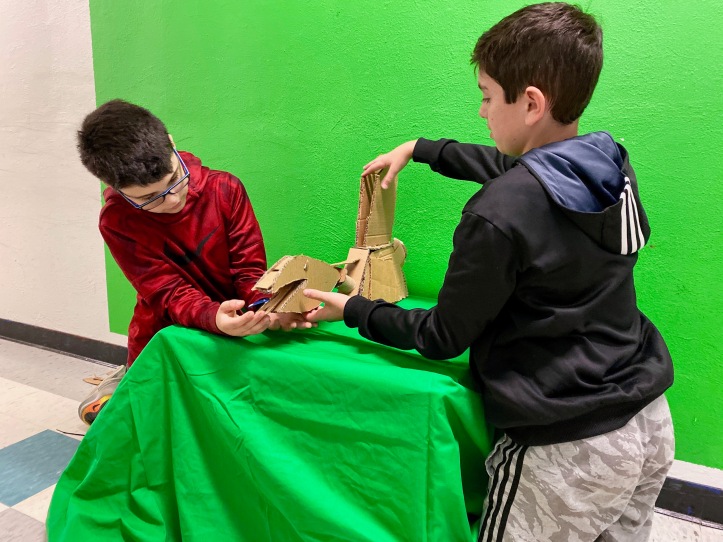 When groups were finished filming their Stop Motion animation, they saved the video to their iPad camera roll. From there it is easy to import it to either Do Ink Green Screen or iMovie. They could then adjust sensitivity of the green screen (Do Ink) or add music or sound effects (iMovie). Sound was not required for the project, so many videos don’t include it. Once edited, the videos were turned in to Google Classroom by one student from each group. Below you can see some of the final projects for this phase. They are fairly primitive and amateurish, but most evoke the playful quality of creating with imagination. You’ll see one student name at the top of each video (a Google Classroom construct), but each represents the work of a group. Here are several:

Tell me, how fun are these? I hope you enjoy them as much as I do! Many of these videos represent first experiences with animation and green screen for my students. Remember, even Steven Spielberg had to start somewhere… 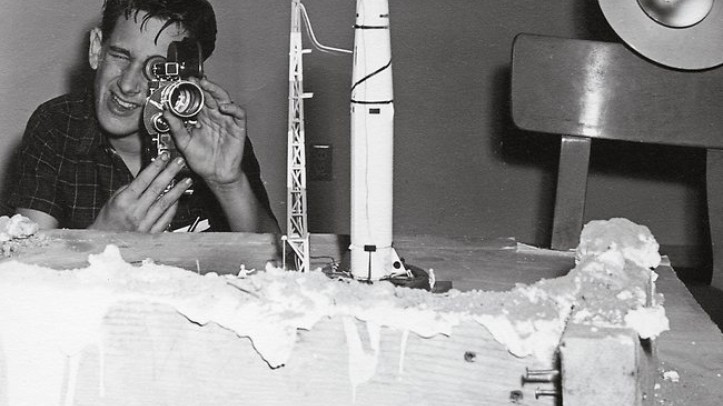 Click here for the St. Gabriel/St. Anne page including all earthquake 2021 posts, fundraising, and updates 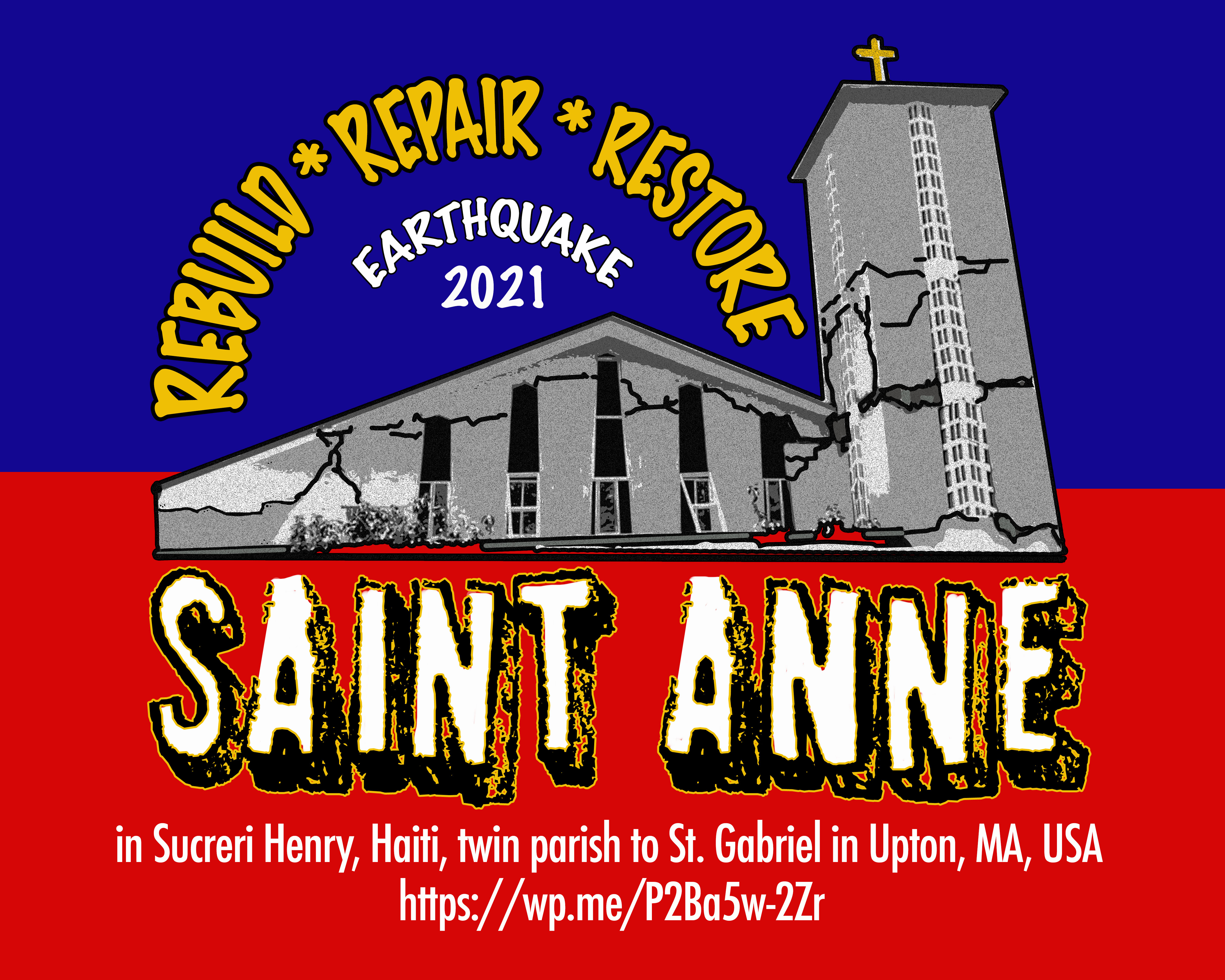 Three site visits to observe student teachers today and four things seen along the way throughout the day: