“I only hope that we don’t lose sight of one thing – that it was all started by a mouse.” – Walt Disney

Rotoscoping is an animation technique that animators use to trace over motion picture footage, frame by frame, to produce realistic action. Originally, animators projected photographed live-action movie images onto a glass panel and traced over the image.

This project is the second of three projects designed to introduce my students to most of the tools in the Sketchbook by Autodesk app. You can read about the first, which was a 3-part project, here: Digital Drawings

Not only is the technique of Painting Over Photos to create animations, it’s a great way to learn to use and apply the many brushes in the app and to learn about the importance of carefully arranged layers – both critical thinking and problem solving in one exercise with a little bit of creativity and self-expression mixed in.

The assignment was to open Sketchbook with a photo (any subject matter) and add a layer right away for painting an outline. Next steps are to:

1. Add a layer between the first two for “sketchy painting” (finding lights and darks)

2. Duplicate the outline layer, place it under the “sketchy” layer and flood fill a medium tone.

All these steps can be seen in the tutorial video:

This project was due on Tuesday, October 27, when Halloween was definitely in the air. Although I don’t plan projects around holidays to respect the cultural diversity of my student population, the students themselves often choose to include holiday imagery. Using Sketchbook to carve a pumpkin is fun and there’s no mess! Here are a couple of Halloween projects:

Max L – My favorite part of this artwork is the night sky background. My least favorite part is probably the nose, mouth, and eyes. They didn’t look as 3D as I thought they would. The inspiration for this was that I wanted to find an object with lots of different shadows and colors. One of the concepts I learned was moving layers behind layers so you could color fill without effecting the other layers above it. When I removed the real photo background it surprised me because with the texture and color from before, it looked like there were a lot of random places with different colors. The first step was to outline the pumpkin. Next, I used the paint tool to fill in spots where I saw different shadows and coloring. I duplicated the outline layer and color filled it. I then moved it under the paint so it didn’t interfere. After that I added the starry sky background and the textured ground. 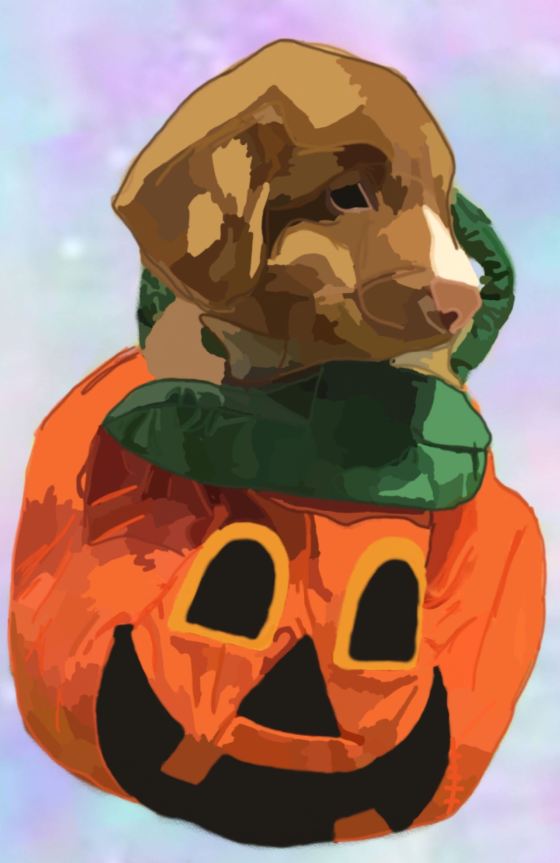 Taryn L – If you can’t tell this is a dog in a pumpkin costume and it is really cute. This assignment was a little tricky so I hope it came out the way it was suppose to. Even if that is not how it is supposed to be it looks cool. Either way I’m proud of this drawing.

On the other hand, this one, by Ekakshar B., is much more personal and documents this moment in history, the time of the 2020 pandemic. Yet it also seems to send a message of hope and optimism with the “sun shining on me”. 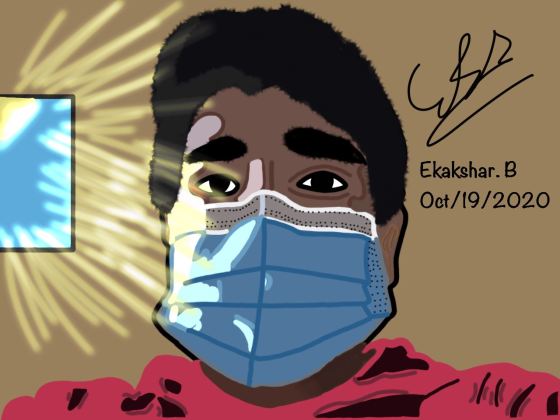 Ekakshar B – This is my digital drawing of my self. I am currently wearing a mask in this picture because of the current times. Towards the Left side of the drawing I tried to make the colors brighter so I could show that the sun was shining on me. If I were to change anything on this picture is that I would make my eyebrows a little less big. That was my self portrait hope ya liked it!!!
Also if you look at it from a distance it really looks like the sun is shining on me.

Many students identified immediately with the cartoon/animation possibility with this medium, gravitating toward a fun and cheerful approach, while others chose to paint over photos of pets, would-be pets, and references from the visual culture: Kieran G – Nyan cat. Nyan cat. Nyan– Oh! Hi! I was just doing some meditation in space with the Nyan cat. We were flouting to the Amun’s us spaceship.

Maxwell B – My favorite part of my drawing is my kitty and drawing him. I wasn’t sure what to draw so I thought about my Kitten and thought why don’t I draw him? I feel like I could make Scooter my Kitten In he drawing more shades and textured and maybe work on the overall drawing of him. I learned how to use layers and textures to draw over pictures. I was surprised that it was hard to texture and add shadows to Scooter. To make this drawing I started by having two layers one with the picture and one with the Outlining then I added color then adding texture and shadows then a nice background to top it of. 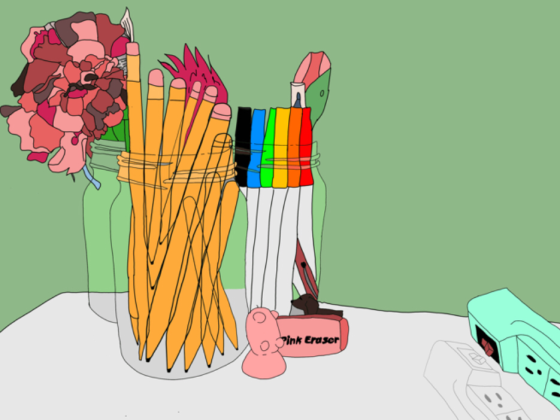 Madison D – My favorite part is All of it because this is a picture of my work desk.
I don’t think i have any thing bad to say about it.
My inspiration was the photo that i accidentally took
The one thing i would Change are the pencils the lines started to merge into each Other and didn’t look good.
I learned Concepts of how to trace.
Nothing surprised me.
When i was looking for photos I found a photo that i accidentally took so i started to draw it the flower, pencils, markers. 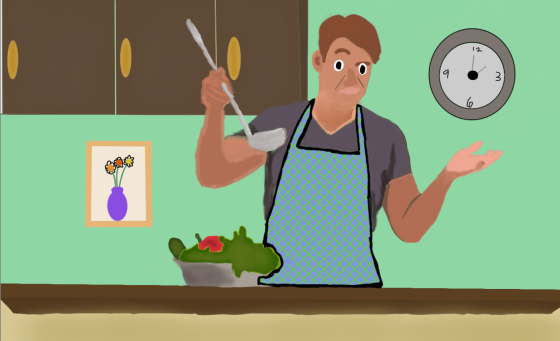 Lily T – My favorite part that I did in the piece was drawing the arms and the salad bowl. The hardest part to make that looks even remotely decent was the face, the nose and mouth were really hard to do. I like to call the drawing: “Where did my soup Go?” Because there’s a lidl but no liquids. I used a stock image to draw over because stock images are random and funny. 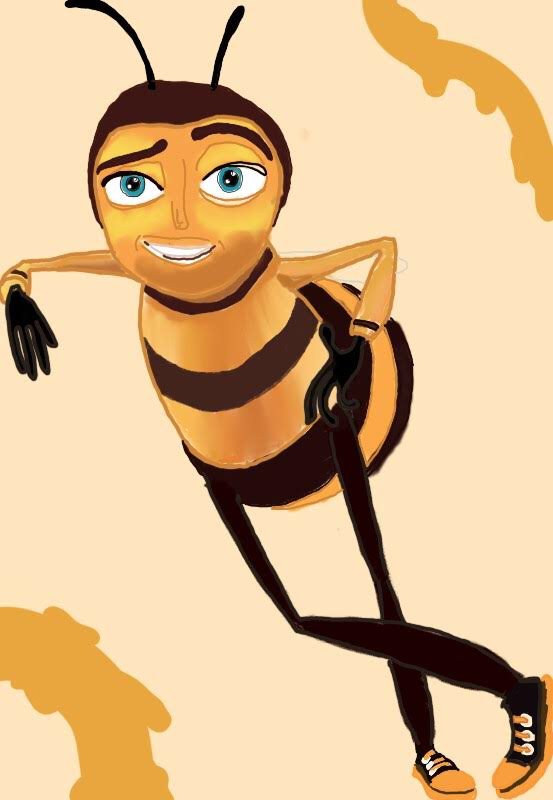 Ava T – My favorite part was tracing the outside of it and my least favorite part was coloring the yellow part of the shirt
I’m not really sure, I just kinda thought it would be funny
Probably the face, I don’t really like the eyes. It’s just messy
I learned this is much much much much harder than I thought, I don’t know ??
How honestly difficult it would be to color this picture and that how well I kind of liked it ??
I put the picture in then I made a new layer and traced the outside then I colored the shoes, shirt face and pants then the background and the little honey drips. 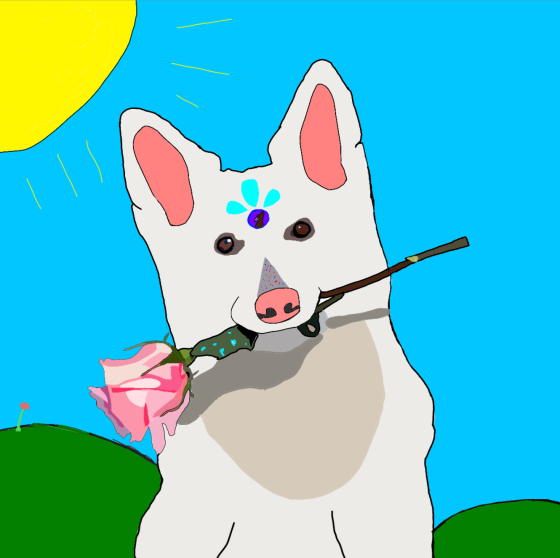 Skylar G – I love the rose, my least fav is the background, I just love dogs that is why I made this, I would change the background because in my opinion it is horrible.

Nina P – My favorite part of the art is the main orca. I learn a lot about lighting and shading because the original picture had a sunset and the lighting was different to normal lighting. The way the art came out surprised me. 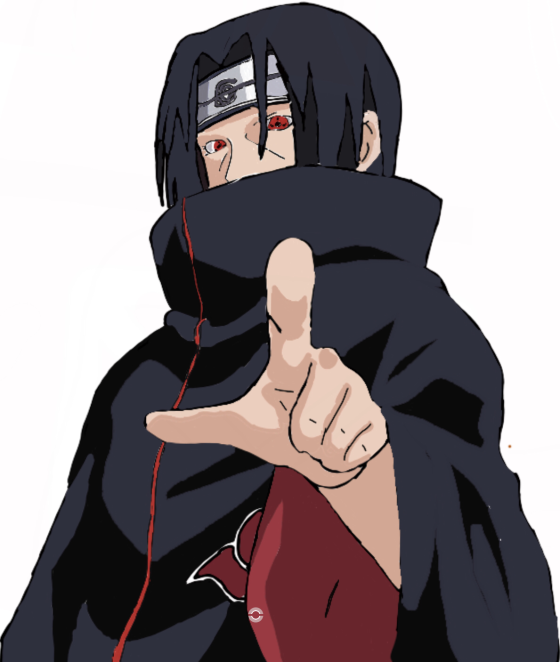 Ryder B – My favorite part was filling in the dark spots and outlining everything. I created this artwork by drawing over another photo in sketchbook. I learned that i like drawing people. The inspiration was that the character the art is based on is from a show. 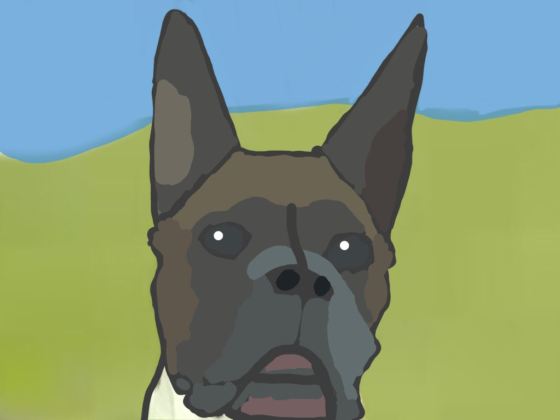 Danny B – My favorite part was trying to match the colors and finding a way to make it work. I liked that it came out amazing!

There are so many excellent artworks responses to this assignment. I’ve already broken my own self-imposed rule of showcasing ten images in a post by including twelve in this one. All of the rest of the eventual 100+ can be found on our online gallery at Artsonia: Painting Over Photos (Rotoscoping)

I hope you go there to see them! Enjoy!