Once Upon A Time Ten – The Tom Lewis Mural

This is the final post about the former murals at Miscoe Hill School. I’ve been putting off writing about this one because of the personal ties I have to it and the sense of loss I continue to feel when I walk by the spot where it was once installed.

This is the tenth in a series of Legacy Posts about projects that happened early on in my art classroom. Recently I was able to tap into some archived photos that I thought had long ago disappeared. I’ve decided to write some blog posts incorporating these photos to share the memories and/or inspire others to try these projects. Some are very dear to me because I took risks with my students and the end result was big learning for all of us, especially me. Also, in my nineteenth year of teaching now, I realize that ideas, projects, and programs come and go, and sometimes come back again. These art projects are just a memory now, and I believe they are worth remembering and preserving. The first post in the series can be found here, and the rest of them follow. Simply search Once Upon A Time in the categories on the front page of the blog.

The first time I met Tom Lewis, I was taking a clay mosaic class at the Worcester Art Museum and Tom (as it turns out) was this guy who hung out with us, not really teaching, but always there either working on his own project or stopping by to check in on how our work was coming. He was quiet, gentle, and kind – exactly what you would expect of a peace activist/artist. 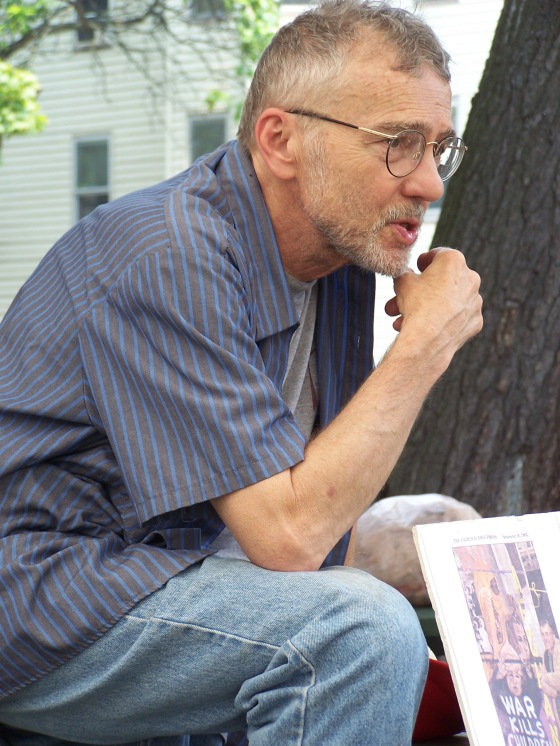 Our paths crossed again in 2007 when I brought the group of Young Neighbors in Action teens from our local parish to Worcester, MA for a week of service in the summer. Young Neighbors in Action is a Catholic program for teens that teaches the tenets of social justice through service to others. This was my third year facilitating a Young Neighbors group. The first two years we had been assigned to the Washington, D.C. area, which had necessitated my driving a fifteen passenger van filled with teenagers through the crowded streets of D.C. (now there’s a memory!)  In 2007 we decided to stay local, to serve our neighbors in Worcester with the hope of maintaining relationships that could be sustained throughout the school year. We were appointed to serve the Urban Missionaries of Our Lady of Hope and Emma House, the transitional shelter where Tom Lewis lived and managed. At Emma House, we repaired, painted, and reorganized. By day we worked hard: 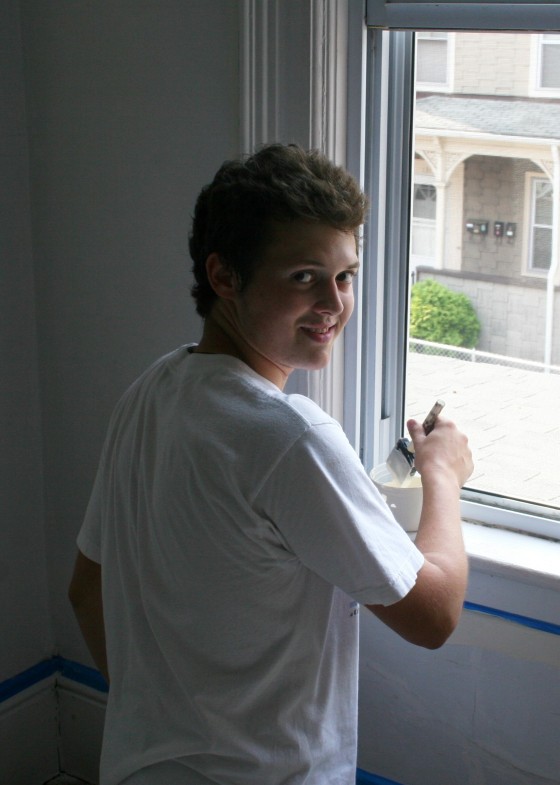 By night we learned about social justice, we sang, we prayed, we danced, we played:

One day we gathered at the Mustard Seed Soup Kitchen, just across the street from Emma House, and Tom talked about his life as a peace activist. During the time of the Vietnam War, Tom was an active protestor against the war. In 1967, Tom was part of the “Baltimore Four”, which gained headlines after taking draft records and pouring blood over them. In 1968, while still out on bail for that case, Tom was part of a famed group of Catholic anti-war activists led by Philip and Daniel Berrigan, both priests, when they did the same thing in Catonsville, MD. This time, however, they used homemade napalm to destroy the records. The group became known as “The Catonsville Nine.” Tom was convicted and served three years in prison. He continued his activism for four decades, even after he moved to Massachusetts in the 1970s. He picketed the White House to express opposition to the Iraq war, and he was arrested in 2005 outside the Sudanese Embassy in Washington in a protest against genocide in Darfur.

Tom Lewis speaking with us at the Mustard Seed soup kitchen

Tom Lewis was a painter whose art portrayed his belief in peace and justice. He created artwork throughout his time in prison. He created etchings and paintings using whatever tools and on whatever surfaces he could find to work with.

Tom worked with youth in his neighborhood in inner-city Worcester to create murals on the sides of buildings and mosaics in the small parks.

These two murals in the Piedmont Street neighborhood are the ones that inspired me to design a school mural in honor of Tom Lewis: 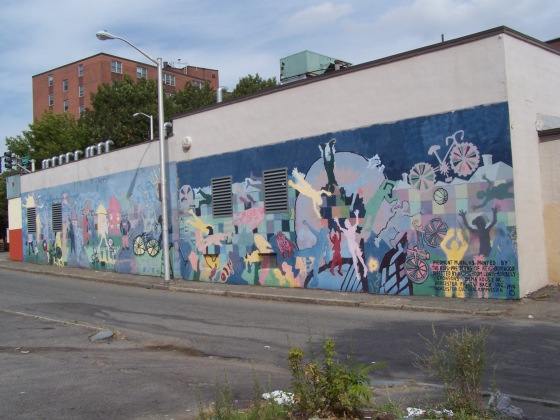 I was drawn to the large figures and random addition of color because I knew my sixth and seventh grade students in the Leave Your Mark exploratory class would embrace the idea and feel confident to attempt it. Here are some close-ups of the figures. Through them you can read the underlying theme for Tom’s mural with the scenes of every day childhood life in the city juxtaposed with the big, bad, wolf of drugs, violence, and gangs. 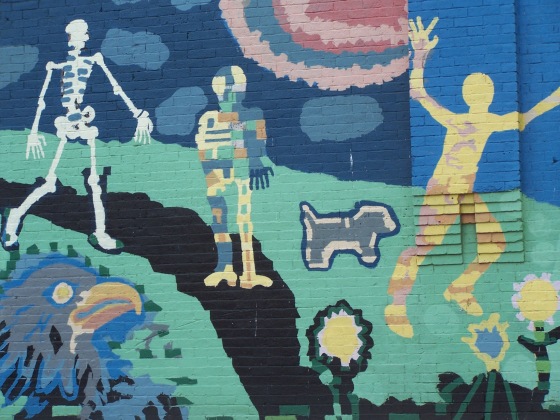 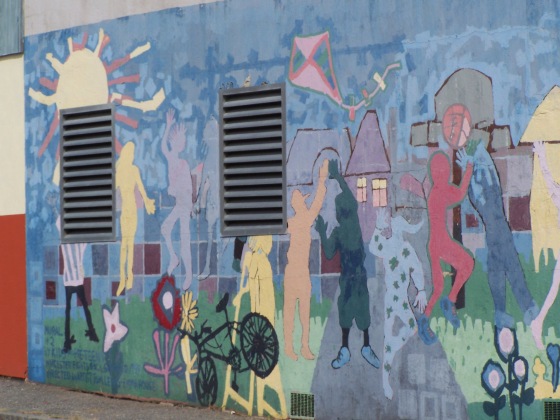 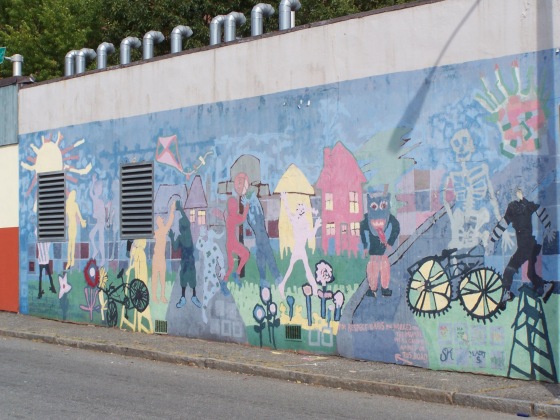 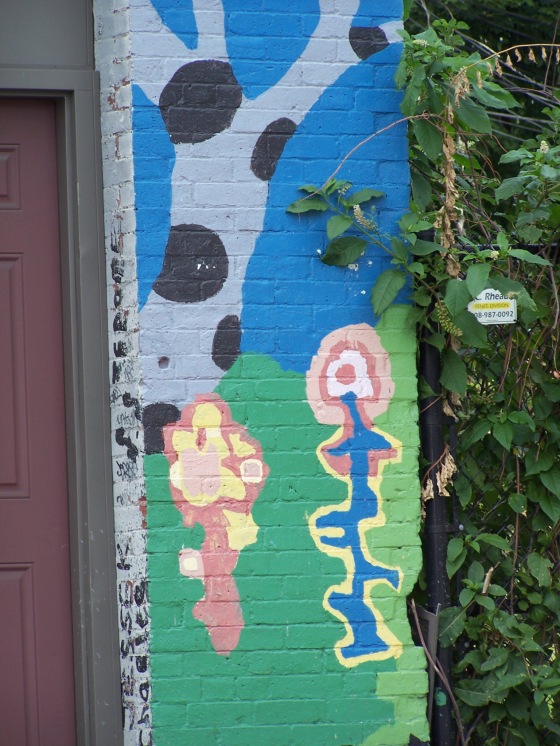 When you are working with children you have to be careful about moderating the intensity of what you share with them. In this case, as we explored this mural idea, I talked about Tom as a peace activist, mentioning some of the pacifist ideals, but of course not mentioning the arrests, or time in jail. We focused on his work with social justice and in helping to share the message of peace with the children in his neighborhood. Tom always used his art to express his beliefs and opinions, so we talked about art as a vehicle for self-expression. That is about how deeply we went in the sixth and seventh grade art classroom. Mostly we focused on the art.

For our mural, students traced each other in action poses on large rolls of white paper. They then cut out the silhouettes and traced them on the big wall at the end of our hallway.

We divided the wall space into four parts, one for each of the seasons. Once all the figures were traced in, we filled in the background with landscape lines, a pond, buildings, a snowy hill (blue), and birds. After an investigation of pattern and color, the artists filled in the shapes with random patterns and bold color. This mural took while to paint, but it was worth it. Here are some isolated images from the mural. 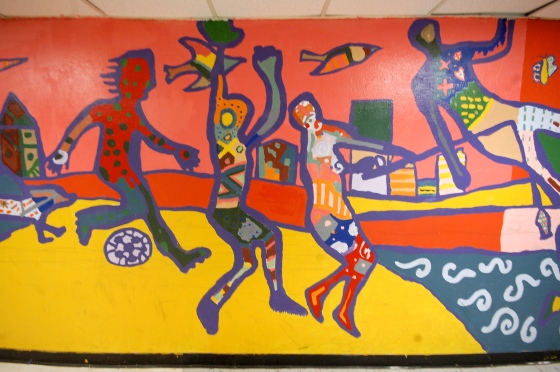 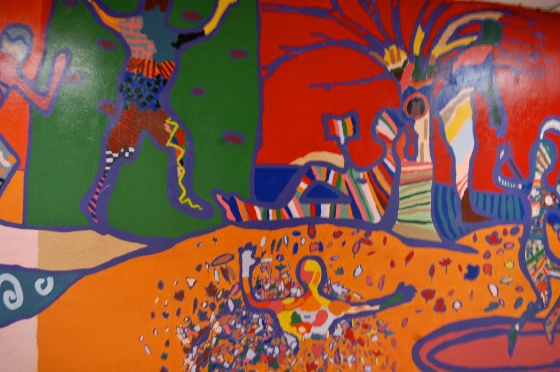 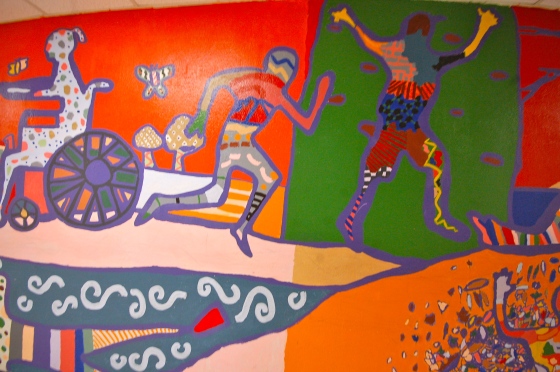 You can see people dancing, walking a dog, skateboarding, jumping rope, playing soccer, riding a horse, chopping wood, jumping on a trampoline, leaning against a tree reading a book, fishing, jumping in a pile of leaves, running, snowboarding, tubing, in a wheelchair flying a kite, tobogganing, and playing baseball, We left out the big, bad wolf and his associates.

In the end we had created a giant, colorful mural that we all walked by every day with pride. I honestly never tired of looking at it. Periodically, a student would drag a pencils along the wall it as he/she walked down the hall, marking the mural (I can’t fathom why anyone would do this) and then the maintenance man and I would wash it off with magic eraser. This mural was painted with bold, bright colors and glazed with a gloss medium to last for eternity.

We had completed the painting in the late fall of 2007, before Tom Lewis died suddenly in the spring of 2008. At that point the mural became an official memorial tribute to Tom.

Unfortunately, not a lot of Tom Lewis’s work is available to see online. I have googled the heck out of it and can find nothing of quality except a tribute including pictures of Tom and his art here. Tom and his former wife, Andrea Borbely, created work together under the name Lewis-Borbely. Their work together of sunflowers was remarkable, I wish I could have found an image to include.

I have such fond memories of flipping through Tom’s art at Emma House when we were working there, moving some of it out of the way in order to paint the bookcases. As I think back to that hot week in the summer of 2007, I realize that none of us knew then how blessed we were to be in the presence of a truly inspirational human being.

You can find more information about the activism of Tom Lewis in a memorial tribute by a Catholic Worker friend here, read a tribute that including video here, and see a video of him speaking about the Catonsville Nine incident here.