My thoughts this Tuesday morning on the seventeenth anniversary of the terrorist attacks on 9/11/2001:

As I walk through the halls of my school, the same school where I was teaching third grade on that day, I think: “We were here when it happened.” As I pass by classrooms and see the teachers with whom I shared shock and horror on that day, I think: “We have never been the same.” And as I look at the students going about their normal student lives, I think: “None of these kids had been born then. They will never know the fear and anger their parents felt as the drama played out for weeks and months following the event. And they will learn about this in class and in books, as removed and dispassionate as my generation was in learning about historical events when we were young.”

The following is from my social media post on September 11, 2013: 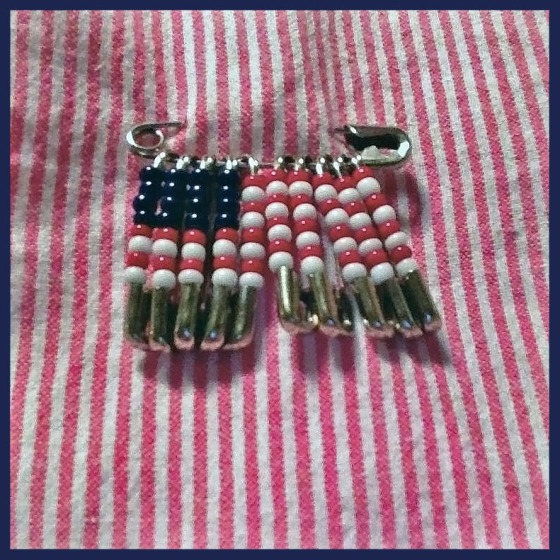 I wore this “flag” pin to school today, as I have for the past 12 years. I was a third grade classroom teacher on 9/11/2001 and had a lovely class of 26 or so kids who I had just met a few weeks earlier. We were just settling in to our school day when an urgent announcement was made for all teachers to check their email. The email informed us of the terrorist attacks and asked to keep our cool and not to talk to our students about it. That was a tall order. We had so many questions. We had email, but few of us had cell phones or cell service then, so we didn’t have access to news or each other. The school internet was shut down almost immediately. Teachers talked quietly in hallways, in doors between classes, and at lunch we gathered around a TV in the teachers room and watched in horror as the planes hit the towers, over and over again. And then we returned to our classrooms. Numb. What a long, difficult day it was.

My son was in the same school with me, at that time in a fifth grade classroom with a teacher I trusted and respected. Still, somewhere in the middle of the day, I snuck a moment to go across the school and up the stairs to simply look at him, to see for myself that he was okay. I had to see him.

Later that day, the administrators went class-to-class in the 5th and 6th grade classrooms to tell the kids what had happened. I grew concerned for my third graders, who rode the same buses with the older kids. Although they are young adults now, I can still visualize their little faces as we gathered around for circle time at the end of the day. “You will hear stories from other kids on the bus about bad things that happened today,” I told them, trying hard to keep it together, “Just promise me that you’ll try not to listen, and wait until you get home to let your parents be the first ones who you talk to about what happened.”

The days that followed were full of questions, theories, and patriotism. My classroom became a safe haven, a respite from the incessant news reports. My students had a great need to “do something to help”. We made the pins in the photo above and sold them for $1 each. We also made a simpler version with just 6 large beads on a large safety pin. Entire extended families worked on the pins at home. Parents gravitated to the classroom and helped my third graders produce pin after pin. Together we raised several hundred dollars for George Bush’s “America’s Fund for Afghan Children” .

Today is Tuesday, September 11. My third grade class of 2001 students are now 25 or 26 years old. I wonder what they remember from our shared experience seventeen years ago. I wonder if they or their families still have the pins we made. I wonder what they will tell their own children about that day as they bring them into this world over the next decade. Lastly, I hope I did well by them and their families on September 11, 2001 and in the weeks and months that followed.