Posted by Mrs. Alice Gentili on February 12, 2018 in #StGabHaiti18, Out of school, Reflection, Uncategorized 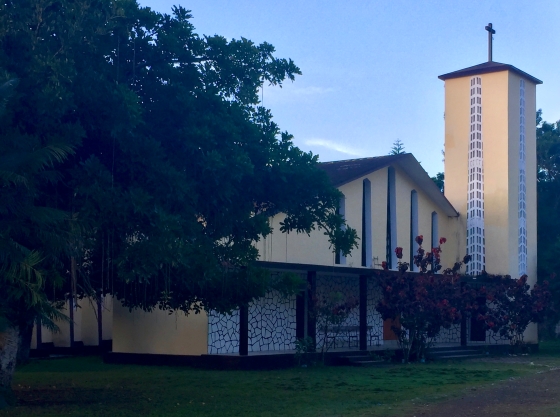 St. Anne Parish encompasses the main church (above) as well as seven chapels in the surrounding villages. On Friday afternoon of our visit we went to visit one of them. It took about twenty minutes to drive there on the unpaved roads. Once there we parked and walked up an incline to the chapel and school building.

View from the chapel down the incline

Chapel with school behind

When the chapel director arrived, he unlocked the door and we went inside the chapel. The LaHatte chapel regularly withstands violent hurricanes with its concrete walls and windows, The corrugated metal roof and framing has had to be replaced over the years. Usually we fund expenses like this as a special project  with either a dedicated collection or through payments made as installments.

Although very simple, the chapels in Haiti reflect the intention to revere and display the glory of God. There are some beautiful light-filled moments in this humble space. The school at LaHatte is not open at this time. One of the goals with which our delegation arrived home is to open the school so more children can be educated. Two teachers must be hired in order to do so. The view from LaHatte chapel is beautiful.

With my camera, I zoomed in on a hill behind the school and could see cows grazing high up on the hillside. Later that same night after a trip to Les Cayes, we attended an Adoration at the St. Anne church. Although the generator was running and the lights were on, they were no match for the nighttime darkness, hence my images and videos are dimly lit.

Jesus with no hands

Pére Didier led the congregation in song after song and there was much dancing.

The focal point was when Pére Didier walked around the church to display the monstrance holding a consecrated host for veneration.

The adoration went on for over two hours. Throughout its entirety, parishioners old and young danced and sang.

After a long, full day, we slept and found ourselves back in church for the 7:00am Mass. I didn’t take any pictures because, in all honesty, I was barely awake and happy to have made it to Mass at all. I simply soaked it in and let it awaken my spirit.

Friday night as we gathered for a light supper, Pére Didier expressed an interest in visiting the Bellevue chapel. With a big smile on his face he told us it would be one hour all the way up hill by foot on a rough trail to visit. We all thought he was joking, but soon realized he was completely serious. 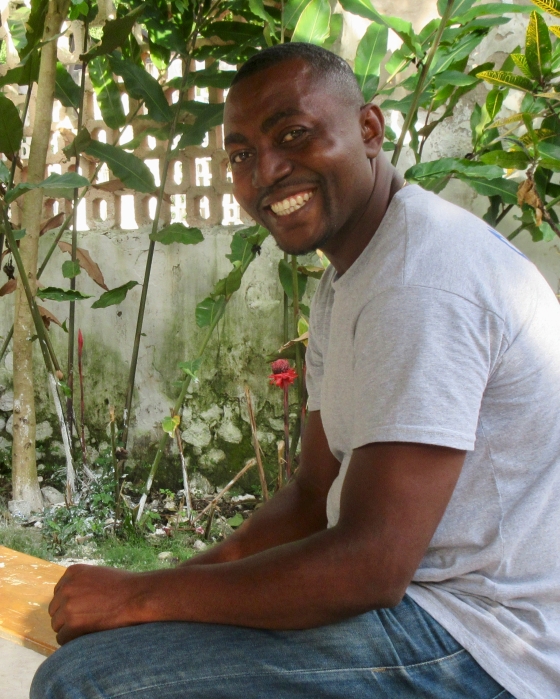 Having recovered from bronchitis and asthma problems just in time to take the trip to Haiti, coupled with the 90º degree heat, I decided not to tempt fate and to stay at the rectory that morning. I took advantage of the time to wash some clothing that gasoline had spilled on the day before (that story in the next post). I can relay the adventure of Bellevue as told to me by the others, and I’m using Chris’s pictures here – thanks Chris! 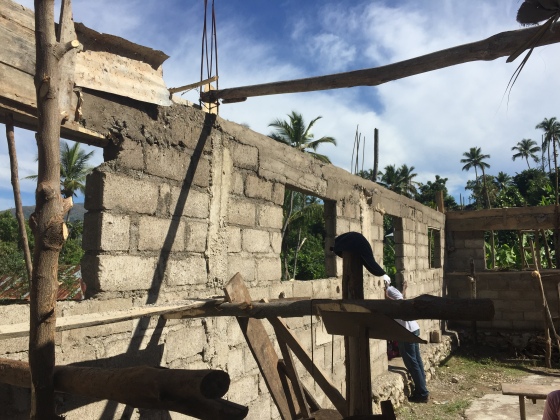 Bellevue chapel was begun a little while back. All the concrete bricks and mortar must be carried up the steep slope, which may be passable by a mule, definitely not a vehicle. The materials are usually carried on heads or backs. The chapel is about 2/3 built, and the people are tired. Indeed it is a long, steep climb to the chapel.

The St. Gabriel delegation was followed to the top by some of the Bellevue residents, including the chapel director (above), and some men who helped the group along the way. Here are a couple of photos that show some of the objects on the way up. 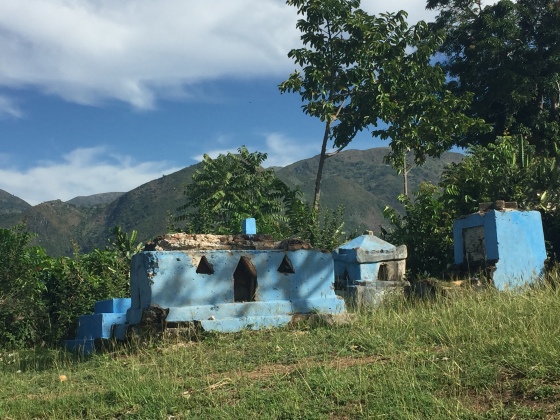 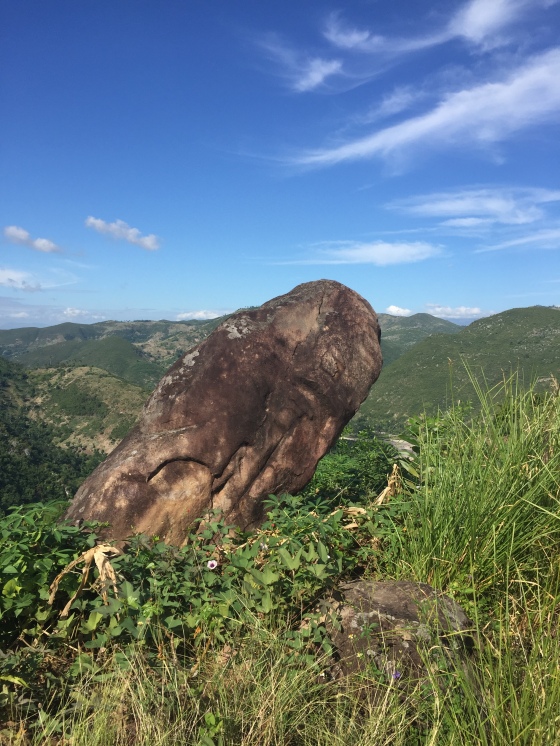 This rock looks like a breaching whale to me

Children flocked to the visitors, some carrying water, others playing with toys handmade with hoops and sticks (similar to toys from colonial America).

At the top of the climb, the group convened in the partial chapel where coconut milk and water were shared with them. 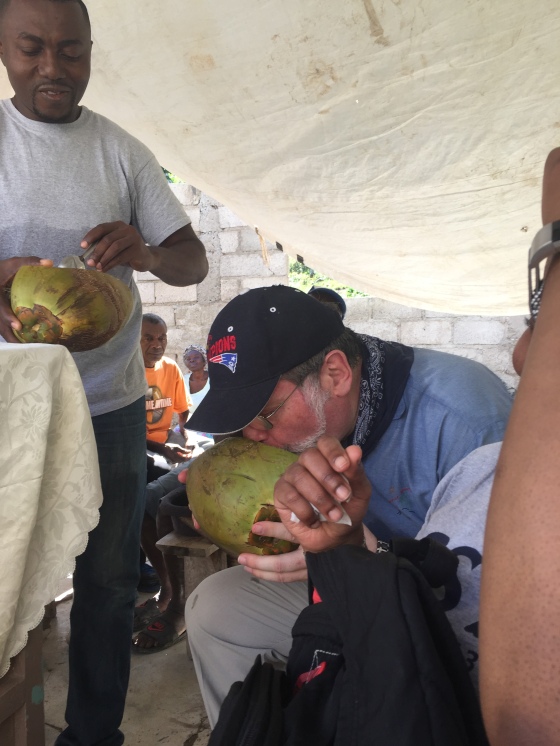 The others that went to Bellevue told of the uphill climb that ended up taking an hour and a half. The downhill climb is treacherous with many rocks and uneven surfaces. They also mentioned that currently students are making the trek daily to attend school at St. Anne. The chapel director at Bellevue would like to finish construction of the chapel so it can be used as a school during the week to help these children and more attend school without the difficulty of the climb. This is another goal our delegation returned home with. On Saturday afternoon we met with the St. Anne chapel directors. The seven chapels are LaHatte, Bellevue, Parraseux, Corail, Loufranc, Terre Neuve, and Mercier. Five of the seven chapel directors were able to meet with us. They all began with praise for Pére Didier and then told of the state of their chapel and families. Verienne was kept busy as translator. We are very happy to be establishing a brand new chapel, Terre Neuve (New Earth), which will be directed by a woman. We were all very happy about this.

I recognized our newest chapel director as one of the dancers at St. Anne nine years ago. 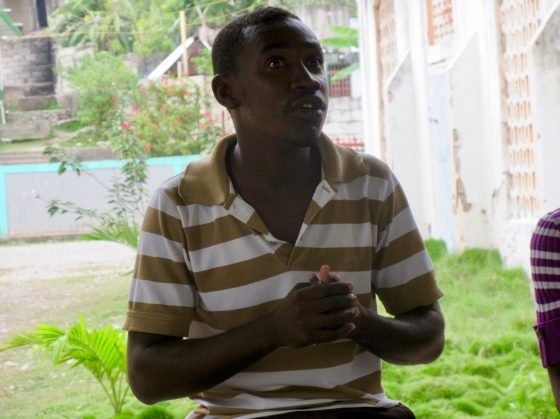 Some of the concerns brought up by the chapel directors include missing roofs due to hurricanes at two of the chapels, there are currently no schools open at any of the chapels, disputed land ownership, lack of a building altogether, and foundation leveling. 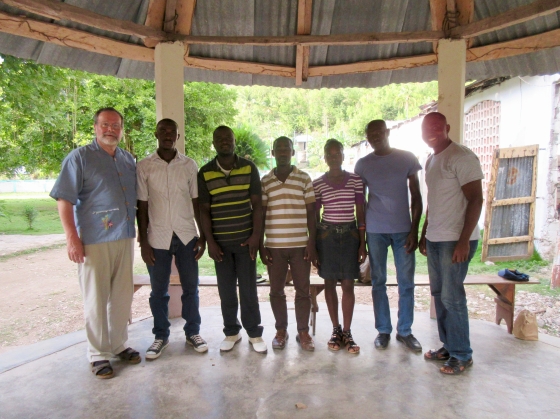 After our meeting with chapel directors, we met with the St. Anne parish council. The council is responsible for the day to day operations of the parish. They, too, began with praise for Pére Didier and all he is accomplishing. He is a good communicator and community organizer, and seems to never tire. Prayer opportunities have increased in the the parish, and they are bringing people back to the parish.

The council has long expressed a desire to transform the old church, which remains in disrepair in the middle of the parish yard, to a cultural center where meetings, concerts, and celebration can be held. The space is smaller than the big church and would be more economical to use for the stated occasions than the big church. 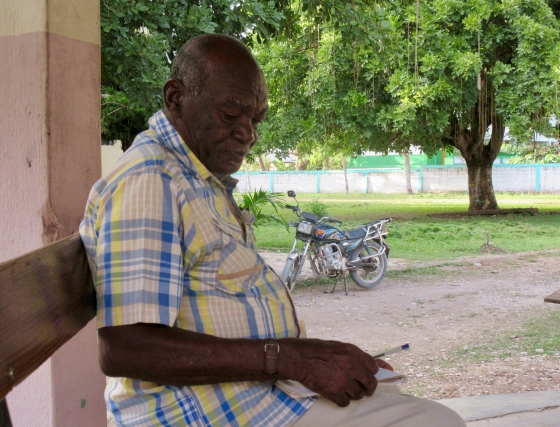 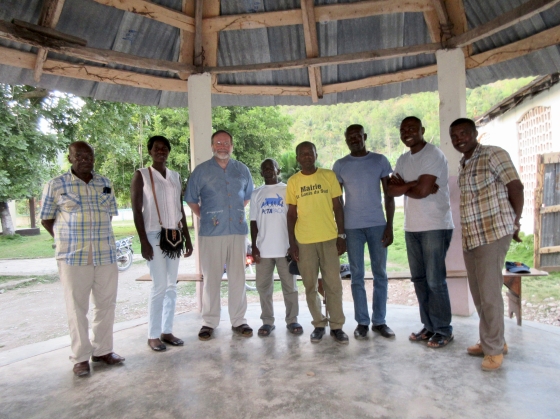 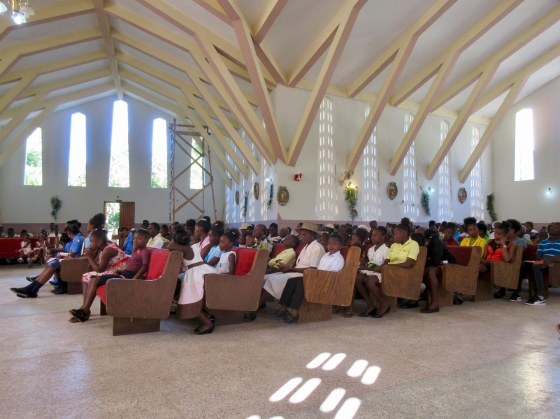 Sunday mass at St. Anne is a big, joyous deal. The music is electric and loud, everyone is dressed up, and there is dancing. Father Larry concelebrated with Pére Didier. 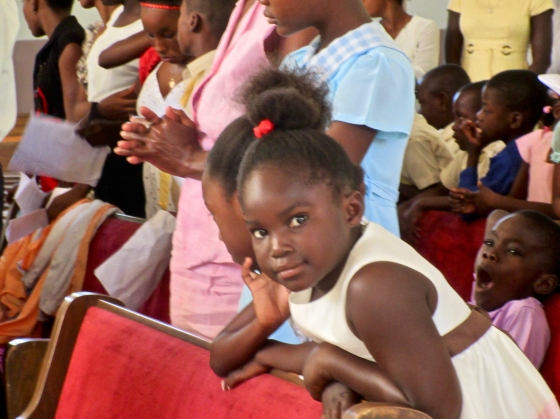 One of the children was celebrating her birthday and got up to address the congregation: 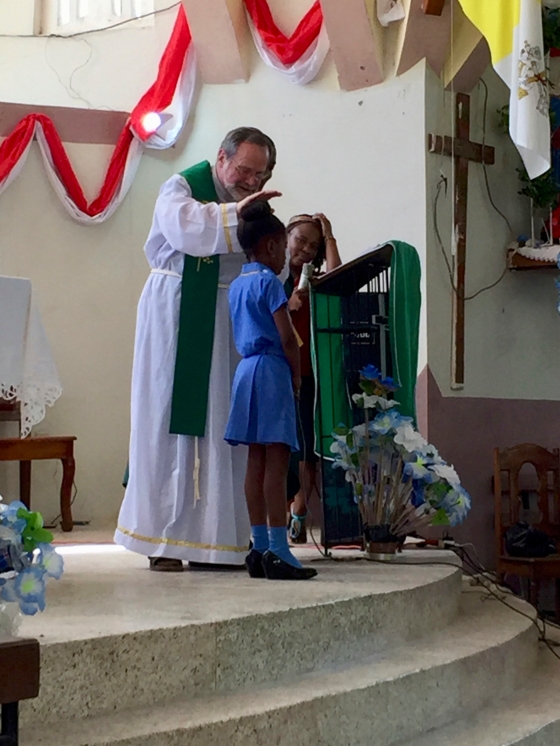 After Mass Chris and I handed out some conversations hearts I had brought along. 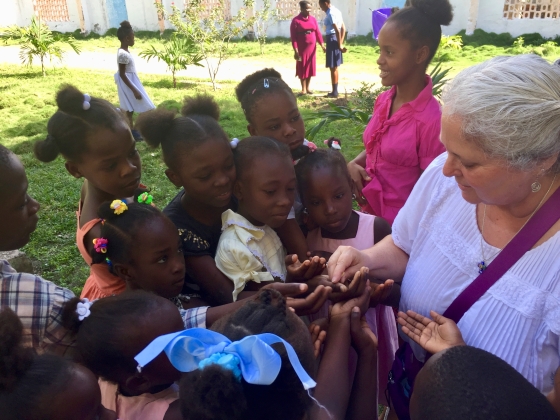 We have done this before, once with friendship bracelets made by my students and the CCD students at St. Gabriel in 2007, and once with rosary beads made by a woman for our trip in 2009. As many as we bring, as much as we think we have it covered, there is never enough. The need is so great, it diminishes all of our confidence and shakes our faith for a moment. There are just so many hands.

My final post on the Haiti trip is upcoming and will feature our experiences and travels around Haiti, at the parish, in Les Cayes, and on Ile-a-Vache. Stay tuned…

One comment on “Let’s Enter In His Sacred House: St. Gabriel Trip To Haiti 2018 Four/Five”