I Don’t Always Wear My Heart On My Sleeve, But When I Do, It’s In Haiti

Posted by Alice Matthews Gentili on January 25, 2018 in Out of school, Reflection, Uncategorized

Sa ki rete nan kè-m dòmi lakay: What is still in my heart sleeps at my home. – Haitian Proverb

This post is scheduled to publish as I leave for Haiti very early on Thursday morning. This will be my third trip to Haiti, the first since the 2010 earthquake. I’m writing this post because I’ve been poring through photos from my first trip in 2007 and the next in 2009. I am moved by the memories and want to share a few of them with you.

Memories of Haiti by Alice Gentili

As parishioners at the former Holy Angels (now St. Gabriel the Archangel) parish, my twelve year old son and I watched with admiration as two young women from the parish stood up one Sunday to announce their upcoming trip to Haiti with a group from the Worcester Diocese in 2001. That was the beginning of what has become a vital twinning relationship with St. Anne Parish in Sucrerie Henry, Haiti.

Within the St. Anne Parish are the central church, six chapels in surrounding villages, a school serving 500 children, and a medical clinic. Our parish supports St. Anne with monthly contributions to be used parish-wide as well as annual payments for the teachers in the school. I am a member of the Haitian Ministry committee. We are charged with overseeing the twinning relationship with St. Anne, including allocating contributions, reviewing project requests, and periodically visiting the parish to assess current and future needs. My first trip to Haiti was in 2007.

My son and I went to Haiti in January of 2007. He was a junior in high school. We had planned to go in the summer of 2005, but the trip was cancelled due to significant unrest in Haiti. Instead we went on our first service trip with Young Neighbors in Action, a wonderful Catholic social justice program for teens that continues on at St. Gabriel thirteen years later  – but that is a story for another time. The opportunity to spend a week in service in Haiti arose again in early January, 2007. 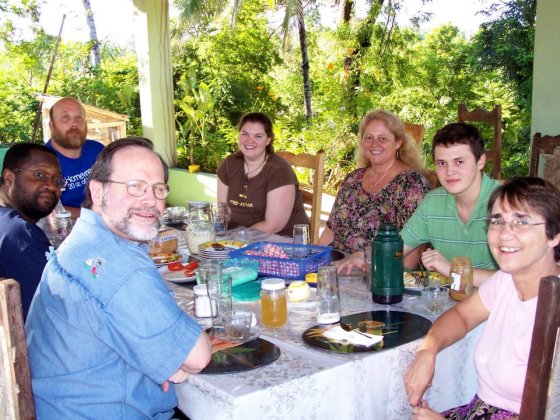 Our 2007 group at breakfast one morning.

This trip opened our eyes to life in Haiti, which is considered the poorest country in the Western Hemisphere. While Haiti certainly is economically poor, it is wealthy in its beauty and in the faith and kindness of its people. During this trip we visited many religious and humanitarian sites including our twin parish of St. Anne, the parish school, and the medical clinic:

The church at St. Anne Parish

The altar and apse with Jesus who has no hands

Haitian Mass with dancers during the Procession

Part of the school

School bench/desks pushed against the wall 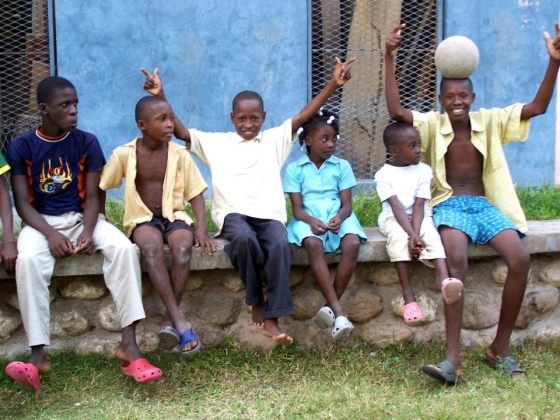 Some happy kids in the schoolyard

The St. Anne Clinic sign from a second floor window

The pharmacy at the clinic

Meeting with the chapel directors

To travel to the outlying chapels, we climbed up into the back of the truck and drove over roads, bridges, and dried up riverbeds:

I remember one day, on the road to one of the chapels, we suddenly had a flat tire. As we waited by the side of the road for the Haitian pastor and some of our group to fix it, many people stopped by to offer advice or their help: 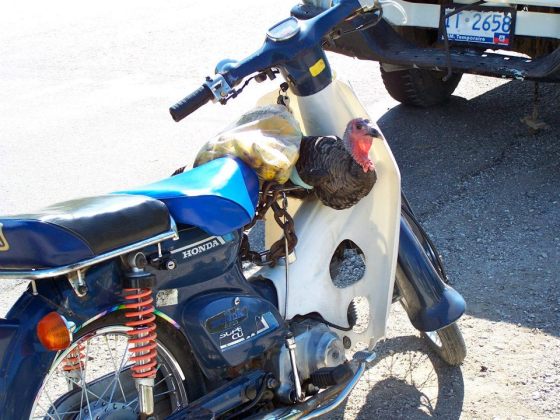 During our week of service in 2007, we also spent time visiting or helping out at a small orphanage for boys, a nursing home, and Pwoje Espwa (Project Hope), which is a large, multi-faceted orphanage.

Students in a multi-age classroom at Pwoje Espwa

It is inevitable that when you visit Haiti, there is a moment when everything you’ve seen there, living conditions so difficult and different from your own, come together in a cascade of stark realities that take your breath away and stop you where you stand. These are life-changing moments. My son and I shared such a moment at Mother Teresa’s Missionaries of Charity Home in Les Cayes.

At the Missionaries of Charity, we were helping to feed the disabled residents and to comfort and console the orphaned babies. A baby boy was taken in while we were there. He had scabies all over his body, and his skin was discolored from the treatment lotion. He was miserable. My son picked him up and rocked him gently, patting his back and talking to him softly, trying to calm him. The baby was inconsolable. I held another baby in my arms, a baby who was just happy to be cuddled and quieted quickly. The crying baby’s anguish was mirrored in my son’s face.  I went to them to try to help, to try to comfort both the baby and my son. And then it hit us, we were just two people in this sea of people who needed so much, and really, we had so little to offer. We could only cry. And promise to do more.

“There are no great things, only small things with great love.” – Mother Teresa 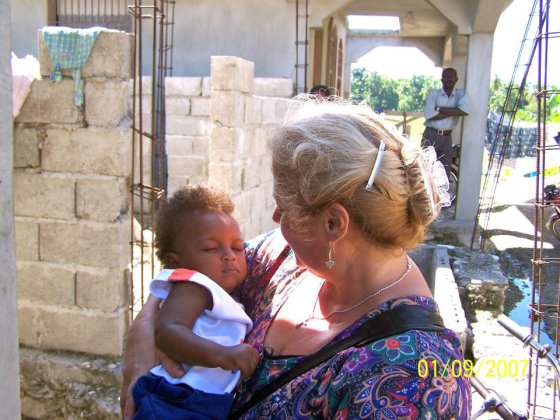 The 2009 trip was purely a custodial visit for the Haitian Ministry committee. We took just five days, two for traveling and three at the parish, to evaluate projects we had funded and to assess current and future needs. We were a small group of five adults. As with the prior trip, we flew from Logan Airport to Miami, FL to Port-au-Prince. We then took a small plane to Les Cayes, barely skimming the mountains, or so it seemed.

View from the small plane

We settled in and began our visits and conversations. We are fortunate to have parishioners at St. Gabriel who are native Haitians. We are indebted to this couple for not only making our arrangements, but for traveling with us and translating our English to Haitian Creole. I also rely on what little I retained from high school French class as many Haitians speak formal French as well.

A rectory door with evidence of concrete work soon to begin 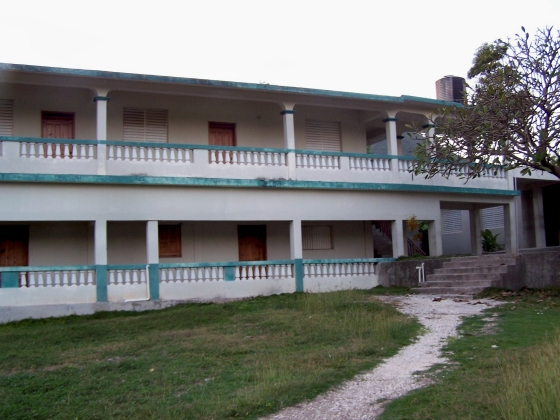 One section of the clinic

One of the chapels 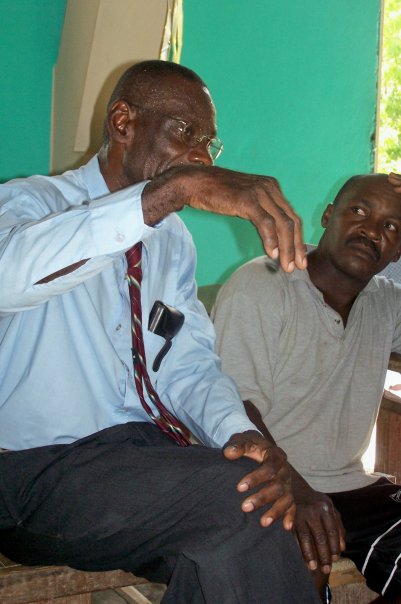 Meeting with the chapel directors 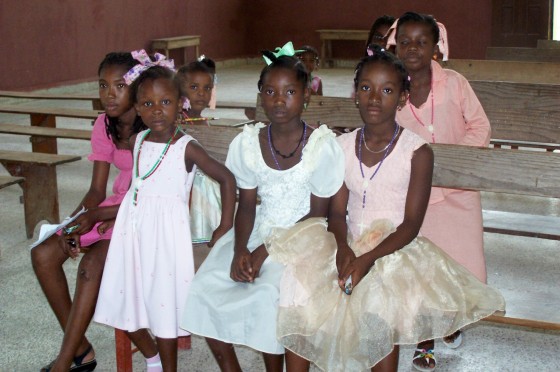 After Mass at st. Anne

Sunday is a true day of rest in Haiti. People come from far and wide to attend Mass and visit with others after Mass. On Sunday afternoon, our group can typically steal away for a few hours in search of the Caribbean Sea. 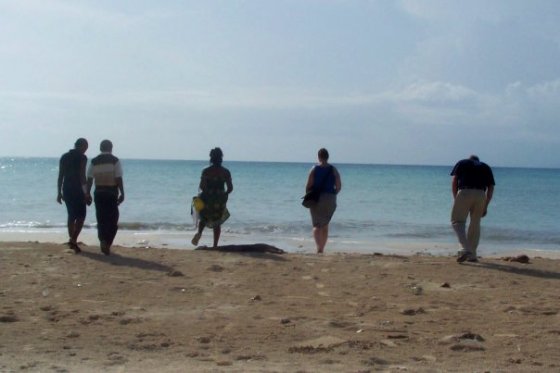 Our group at Gelee Beach

The 2010 earthquake struck Haiti just six months after the 2009 visit. Having been there so recently, we were heart-broken for the people of Haiti. We could not even consider visiting because the island was not able to sustain itself, never mind an influx of additional people. So we waited at home and led fundraising efforts, including one at my school, where we raised over $7000.

By all reports, our parish is stable once again and can host our visit. Three days on the ground goes by quickly. This trip will pass quickly, too. The plane is no longer available between Port-au-Prince and Les Cayes, so we will drive the four hours west to Sucreri Henry. I expect traveling on the road will afford an opportunity to see much more of Haiti. And I’ll report back. Until then, let me share with you some images of the unique and beautiful Haiti I have seen:

The streets of Les Cayes 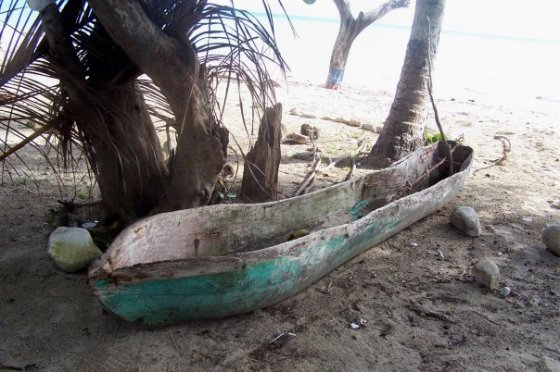 Tamarind tree in the schoolyard

Young boys in a boat 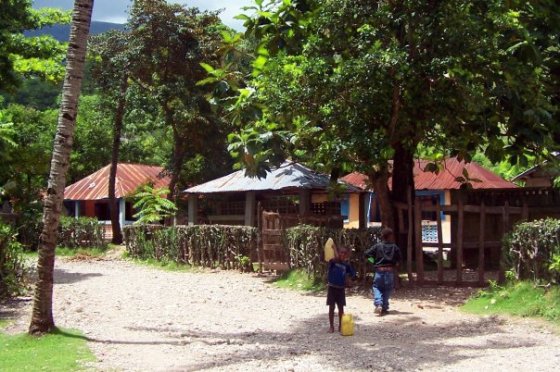 One of the outlying villages

My head has been in the clouds as I’ve pored through these photos. I’m glad for them and the memories they provoke. Throughout the past five or six years I’ve been consumed by my teaching, coursework for certification in a new area, leadership in my local teachers union, and leadership in the state art education association. I have recently stepped away from these commitments to re-ignite my passions. In rejoining the Haitian Ministry I’ve realized that, even after all these years, Haiti is still deep within in my heart. And it feels like coming home again.

Sa ki rete nan kè-m dòmi lakay: What is still in my heart sleeps at my home. – Haitian Proverb 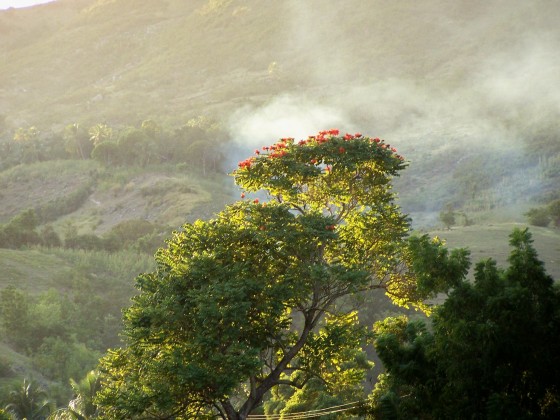 Should you want to learn more about Haiti, I recommend the following books:

One comment on “I Don’t Always Wear My Heart On My Sleeve, But When I Do, It’s In Haiti”