Posted by Mrs. Alice Gentili on September 24, 2020 in Books, Home Time, Legacy Post, On the Farm, Out of school, Reading, Summer2020, Uncategorized

“It is not often that someone comes along who is a true friend and a good writer. Charlotte was both.” – E.B. White, Charlotte’s Web

This is the fifth in a series of posts written after a summer spent chiefly at home during the time of COVID-19. Except for occasional grocery trips, visiting my mother, or a trip to the wide open beach, we have been home. I’ve put together these five posts to document this Home Time, with a keen focus on the silver linings of the situation. This final post is about my husband’s new love. 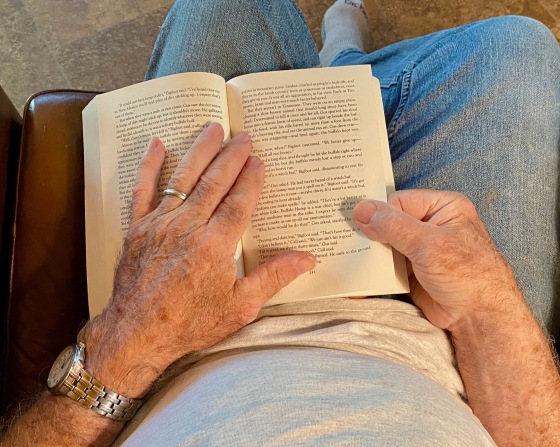 When I taught third grade in the late 1990s, Charlotte’s Web was an annual treasured chapter book my class and I read together. Those were the days of Literature Circles*  and the kids would adopt and switch roles as they read the book together. There were many opportunities to check for understanding with this method of learning. When my husband, Dick, told me he’d like to try reading a book for the first time since he was in high school (over sixty plus years ago) Charlotte’s Web immediately came to mind as a good place to start because I knew the book well, and like Fern, we live on a farm. 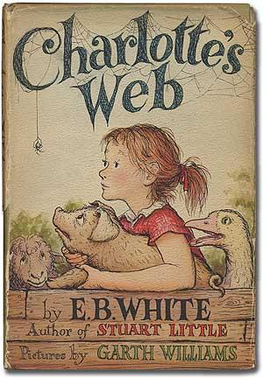 Sixty years without reading a book, and frankly, being kind of boastful about it! Dick and I couldn’t be more opposite. I read all the time – all kinds of books, sometimes taking turns between two books at the same time. We’ve been married for fourteen years. I’ve seen him read newspapers, especially his son, Keith’s, small town newspaper, The New Boston Beacon. He reads magazines, too, particularly those about farming and horses. If you were to ask him what his favorite book is, he would say, “I don’t have one, I don’t read books.” I would ask, “Really? Never?” He’d shake his head, “Nope. Never read a book except when I was in school.” 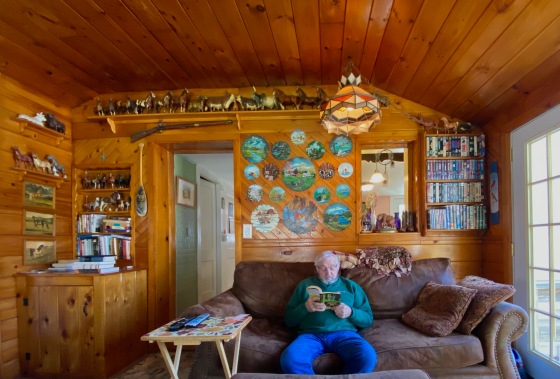 In his own little world

When the Covid-19 pandemic closed everything from schools to museums to restaurants, we were suddenly home all the time. Once I got past the fear and anxiety the pandemic induced, I welcomed the chance to be home. Making art, sewing, catching up on projects, binge-watching TV, gardening, and reading could keep me busy for a long time. Dick is a home-body, too, or rather more a farm-body. His whole life he has raised animals. Starting with pigeons and rabbits when he was a boy, to cows, horses, pigs, prairie dogs, llamas, and emus later on, and now with our current menagerie of alpacas, goats, peacocks, chickens, and doves. He has always been an avid outdoorsman, whether farming or as a landscaper, as he was for thirty years. He had his own business, incorporating several trucks, machinery, and crew. With the early mornings and being dead tired at the end of the day, there wasn’t much time for reading. 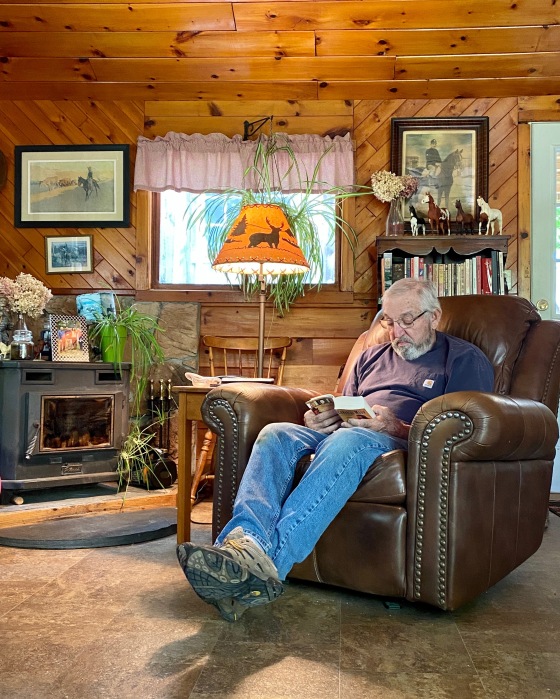 Recently retired and home all the time because of the pandemic, when in late March Dick mentioned an interest in reading, he voiced concern over not remembering what he was reading and having difficulty with unfamiliar words. My teacher sensibilities kicked in immediately as I wondered if he had a learning disability and if I’d be able to help him work through it.  I asked Dick if he wouldn’t mind reading Charlotte’s Web to help me gauge his abilities. He acquiesced. As he read he would check in after each chapter and we would talk about the book. He would summarize the key events, setting, and plot. It seemed to me that he understood what he had read just fine. When he finished the book I asked if he had minded reading a children’s book. “No” he said, “It was a good story.” Phew. I am still embarrassed about asking him to read it, though. 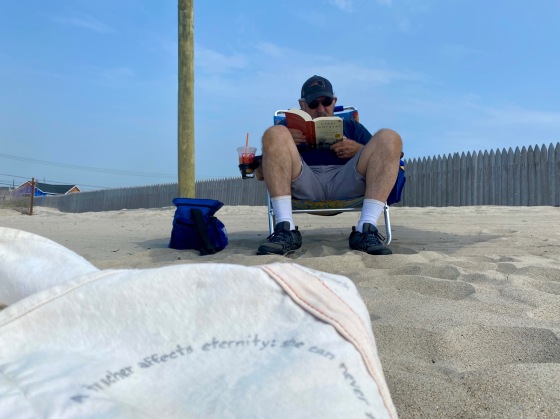 Once I knew Dick could read just fine, I suggested he read A Walk in the Woods, the story of two friends hiking part of the Appalachian Trail by Bill Bryson. I had read it years ago, had really enjoyed it, and happened to have a copy on hand. He read it and liked it, except for all the facts about the history of the trail that were, in his opinion, non-integral to the story. That’s exactly the way Bryson writes, and different from Dick, I love him for it. In fact, I read two Bryson books this summer – One Summer – about the summer of 1927 (the year my parents were born) and The Body – A Guide for Occupants, which were both fascinating AND full of facts. 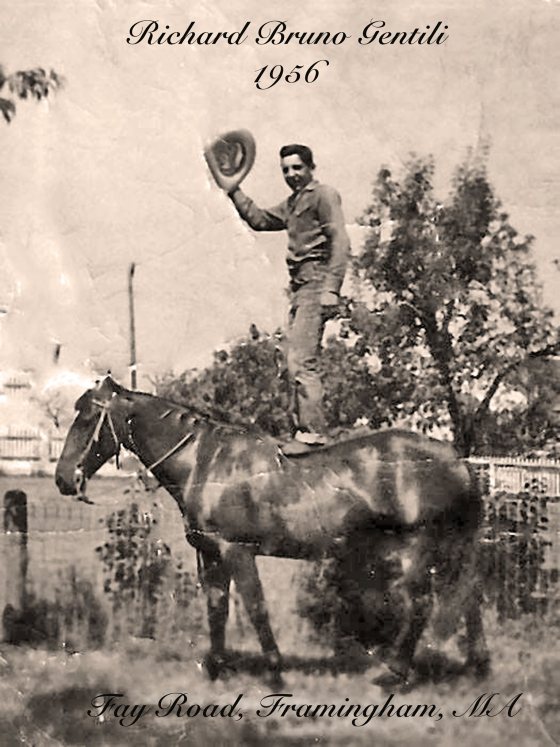 I kiddingly refer to Dick and his late uncles as “the last of the Framingham cowboys” because of their love of horses, riding, and all things cowboy. When he was a teen and young adult, Dick would dress as Tonto and ride with his uncle, Lone Ranger (of course), in the local parades. See for yourself: 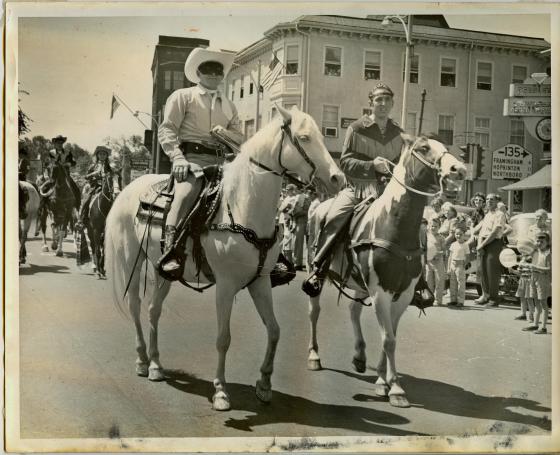 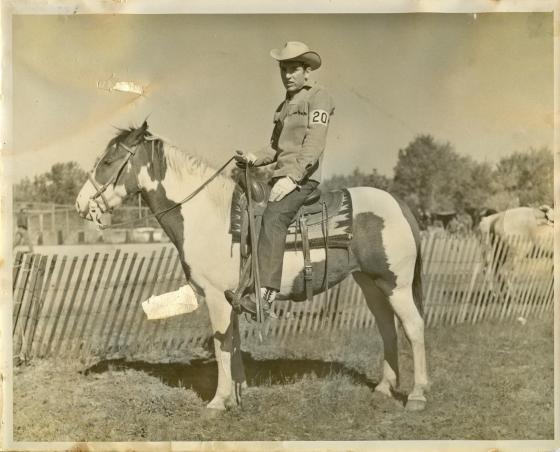 And here is a live action video of Dick riding not one but two horses:

I was aware of the cowboy and western genre of novels, yet never having read them, I wasn’t sure what he’d like. I did some research and ordered the collection The Steve Dancy Tales by James D. Best for him. It was early in the quarantine and shipments were slow, so they didn’t arrive for a week or so. Then I remembered The Red Pony by John Steinbeck, which I knew I had somewhere in the house. Dick read the book and when I asked him about it, he said, “It’s a good story, but it’s miserable. Nothing good happens.” Yup. Quintessential Steinbeck! 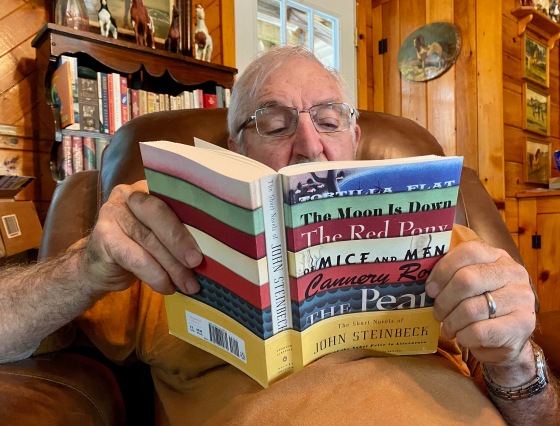 Once received, the James D.Best series took a little while to get through. It was a joy to see Dick reading with intent. He would happily fill me in on the sequence of events as he read. I enjoy hearing his perspective on plot twists and character pitfalls and triumphs. There were six books in the series plus another I had bought “just in case”. 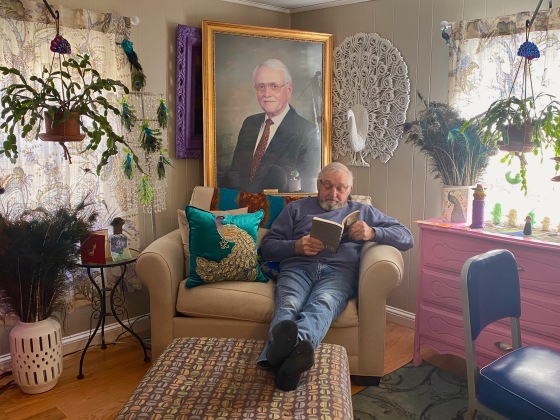 Reading in the Peacock Room next to a portrait of my father we had placed there for a whole family Zoom meeting.

When he had finished all seven Best books, I downloaded some collections of short stories to the Kindle app on my iPad so he had something to read while another set of books were on order. I couldn’t keep up! As much as Dick never read books as an adult, he is also somewhat of an accidental Luddite, eschewing the use of cell phones or computers. To see this non-computer, non-device using husband of mine walking around carrying an iPad was surreal and prompted reality checks (and photos for documentation) every time. 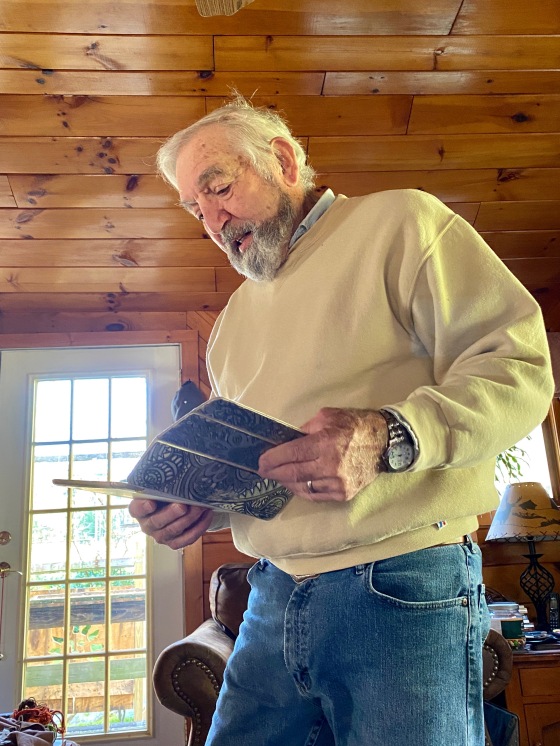 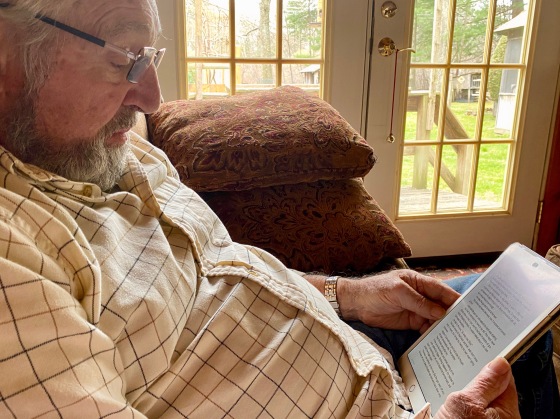 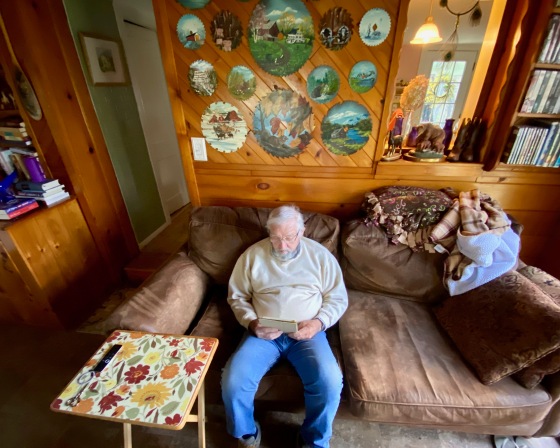 Around this time, my brother Bill came down from Vermont and stopped by following a visit with my mom. We got to talking about Dick’s new love of reading and he mentioned the author Larry McMurtry and Lonesome Dove. I had the series ordered within an hour of his departure. Dick loved the books. He read them everywhere. 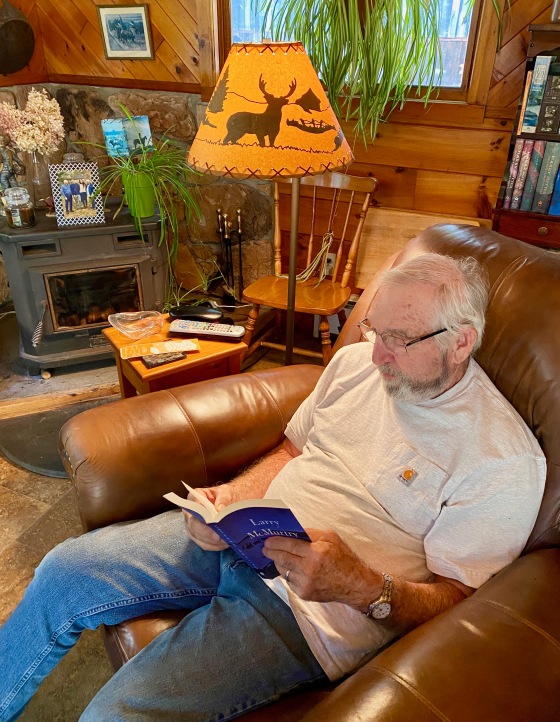 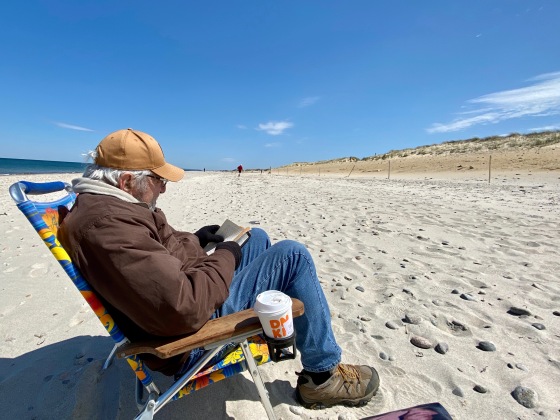 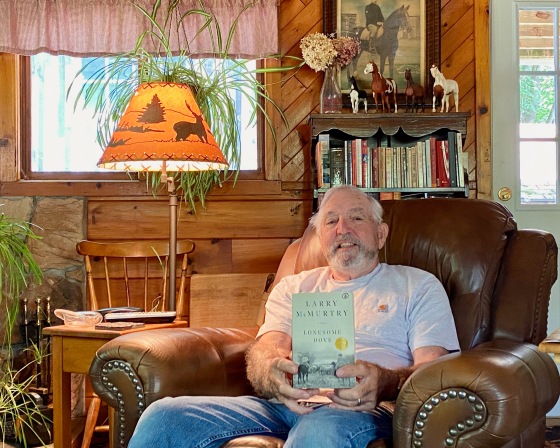 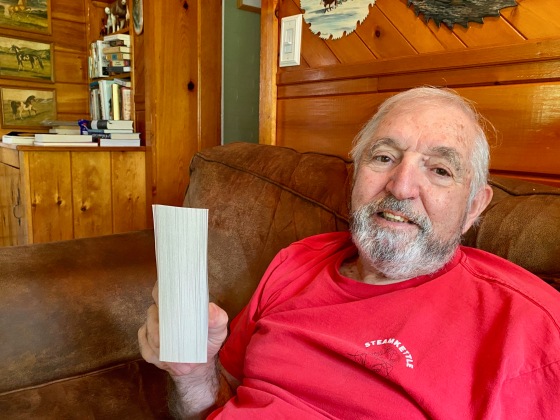 Some of the books in the series were 800 pages long

My personality is such that I need stimulation and am always doing something, whereas Dick has the ability to sit in complete stillness and to find the “zen” in all tasks, especially those most menial (for me), like weeding, for instance. Honestly, there have been times over the past few months when it has struck me how still Dick is when reading. When he is completely absorbed in the storytelling. What a gift. 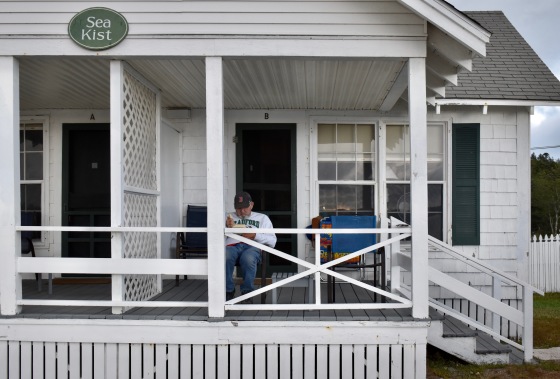 I asked him what he likes about reading and he said, “It’s like you’re in the story. You’re there wherever it takes place. You feel what the characters feel.” So here we are, essentially grounded by the pandemic, and through his reading, Dick has traveled from the Texas panhandle to Monterey, California and throughout Montana and Wyoming. 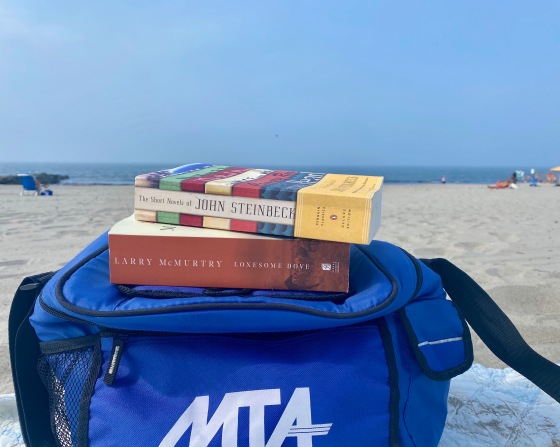 Dick’s new love of reading has truly been a silver lining of this Home Time, this time of the pandemic. The timing of it seems almost providential in preparing us for what was to come early this fall. 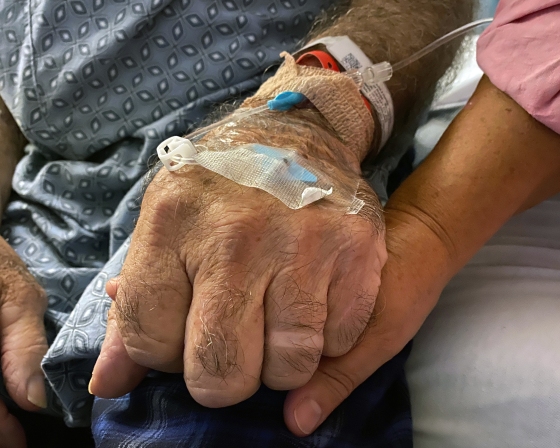 I started writing this series of posts in August, hoping to have them published by the time we returned to school this September. The day after Labor Day, Dick called his physician about feeling tightness in his chest, neck, and throat. During this time of COVID-19, neither of us was eager to go to a hospital, but we had to have it checked out. Before we knew it, Dick was being transferred from the local hospital to a bigger hospital by ambulance. After a week of every kind of test you can imagine, Dick underwent open heart/bypass surgery.

Imagine my surprise when, the day after his surgery, I called the ICU at 6:30 in the morning to check on Dick and see how he did overnight. “He did really well,” said the nurse, “and he mentioned he had finished the book he was reading and wants you to bring in another one.” I was not expecting to be talking about books the morning after surgery!

It’s been a little over a week now since the surgery and Dick has been home for a couple of days. While he was in the hospital, I cleared a shelf on the bookcase in the family room for his books. Dick’s father made the bookcase for him about forty years ago. In the photo over the bookcase is Dick’s grandfather, who had been a policeman in Italy before coming to the United States. 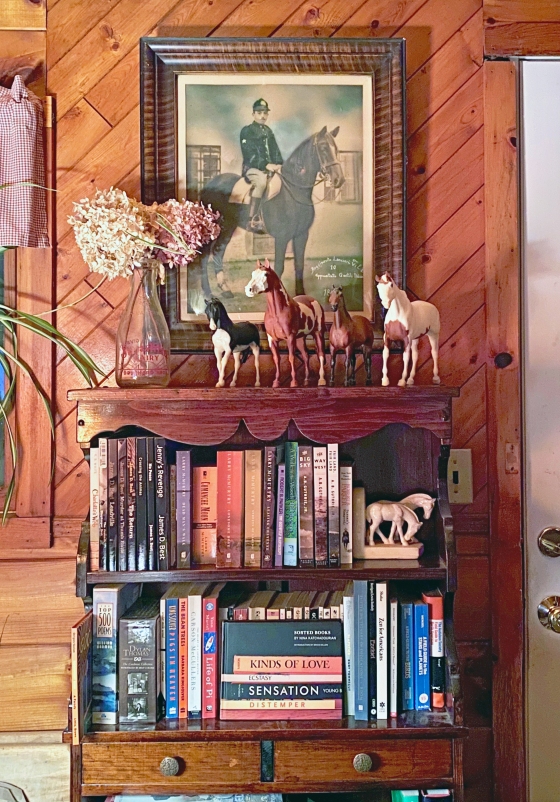 And here is a closer look at the books. In no time I’ll have to clean off a second shelf for his collection. 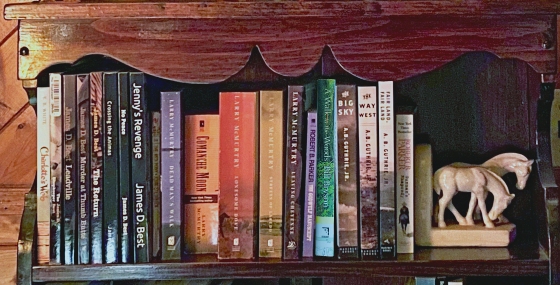 A few of these books are 800 pages plus

While I know it will be weeks before Dick is able to participate fully in the tasks of farming and gardening (described in two of the previous Home Time posts), now that he is home, he can at least feel included. Yesterday he came outside to enjoy the beautiful day while I did the farm chores. Soon he will be doing what he can, within his restrictions, to help. Meanwhile he has several books to enjoy to help pass the time of recovery. 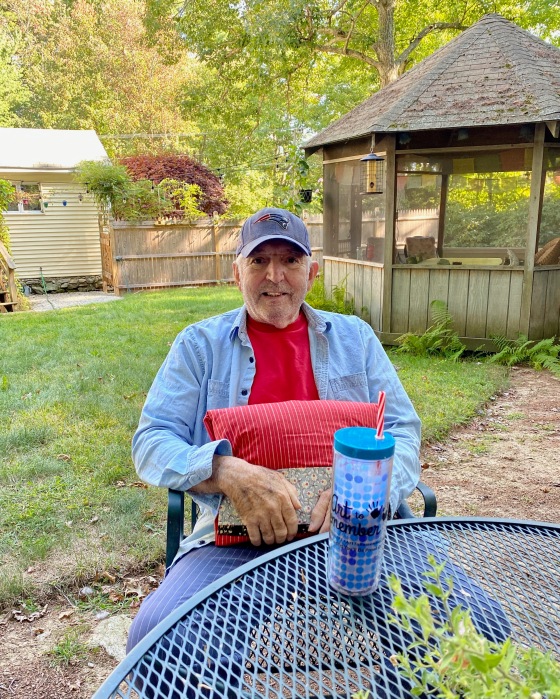 This is the final post of five posts about the silver linings of Home Time during the quarantine for the COVID-19 pandemic. They are recorded on this blog as pictorial essays of our life in central Massachusetts from March – September 2020. Thank you for reading them. I look forward to continued silver linings as we begin to open up the state over the next few months. And I hope you are enjoying your Home Time just as much as we are. – Alice

He is the happiest, whether king or peasant, who finds peace in his home. – Johann Wolfgang Goethe

← How I Spent My Summer Vacation Four/Pottery
Couldn’t Make It To Open House 2020? →